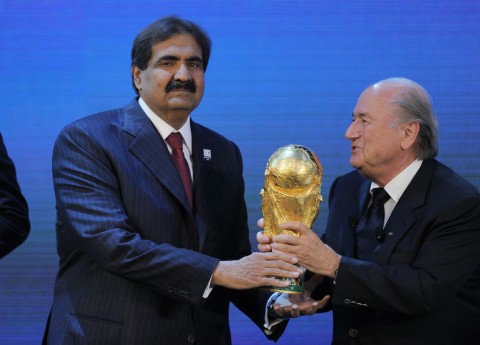 Former FIFA president Sepp Blatter admits it was a ‘mistake’ to award Qatar the 2022 World Cup.

The 86-year-old was the head of football’s world governing body when Qatar controversially won the vote in 2010.

But Blatter, who was forced to resign in 2015 after the FBI opened investigations into alleged corruption at FIFA, now concedes that Qatar is ‘too small’ to host the tournament and feels the Unites States should have won the vote for 2022.

‘The choice of Qatar was a mistake,’ Blatter told Swiss newspaper Tages-Anzeiger.

‘At the time, we actually agreed in the executive committee that Russia should get the 2018 World Cup and the USA that of 2022.

‘It would have been a gesture of peace if the two long-standing political opponents had hosted the World Cup one after the other.

‘It’s too small a country. Football and the World Cup are too big for that.’

With the World Cup due to start in less than two weeks, Amnesty International say that human rights abuses in Qatar continue to ‘persist on a significant scale’.

An investigation launched by The Guardian earlier this year revealed that over 6,500 migrant workers from India, Pakistan, Nepal, Bangladesh and Sri Lanka have died in Qatar since 2010.

Many migrant workers brought in to ensure stadiums, facilities and infrastructure are built on time have been left in debt, owed pay for several months’ work and unable to return home, with Qatari government failing to step in.

When asked if he feels responsible for the decision, Blatter said: ‘For me it is clear: Qatar is a mistake. The choice was bad.

‘What I’m wondering: why is the new FIFA president [Gianni Infantino] living in Qatar? He can’t be the head of the local World Cup organisation. That’s not his job. There are two organizing committees for this – a local one and one from Fifa.’

Despite regretting the decision, Blatter added: ‘I can only repeat – the award to Qatar was a mistake, and I was responsible for that as president at the time.

‘Now that the World Cup is imminent, I’m glad that, with a few exceptions, no footballers are boycotting the World Cup.’

Blatter also claims FIFA amended the criteria it will to select host countries in light of the deaths of construction workers in Qatar.

He said: ‘Since then, social considerations and human rights are taken into account.’