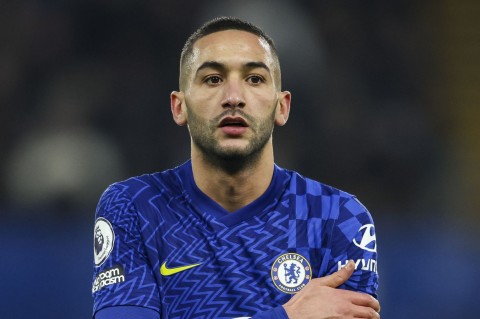 Marco van Basten has urged Hakim Ziyech to leave Chelsea and says the midfielder’s situation at Stamford Bridge is ‘not good for football’.

Ziyech has made just two appearances in the Premier League this season, while he has been left on the bench by Graham Potter in Chelsea’s last two matches.

The Morocco international was linked with several clubs in the summer transfer window with Tottenham, Manchester United and AC Milan all reportedly interested.

And Van Basten feels Ziyech should push for a move away from Chelsea in January in order to save his career.

‘There is another transfer window coming up,’ Van Basten told Ziggo Sport.

‘It is sad and a shame. Ziyech is a great player. We have to see someone like that, we watch TV for such a player and we come to the stadium.

‘It is a pity for the whole of football that he is on the bench. If these kinds of players do not get minutes, it is not good for football.’

Van Basten also criticized the size of Chelsea’s squad and feels players like Ziyech are being wasted when they could thrive elsewhere.

Asked if he believes Ziyech would taken a step down to leave Chelsea, Van Basten said: ‘I don’t know but there is another problem.

‘There should actually be a rule that clubs can only have a certain number of players.

‘So they [Chelsea] have way too many and that actually makes football less interesting. A player like Ziyech could just play at another club and entertain the fans.

‘Soon there will be teams that have 35 players, five or six of whom never play. They could excel at other clubs.

‘All competitions must be reduced to eighteen clubs. Then you play a few fewer matches. Then you can’t use more than, say, 26 players during the season.

‘You see that it is possible. At Real Madrid, for example. They just have a normal selection and just eighteen to twenty players who always play. So in principle that should be possible.’