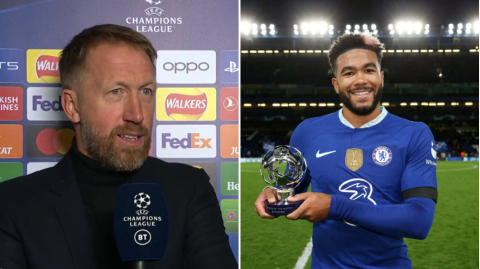 Graham Potter believes Reece James can follow in the footsteps of Frank Lampard and John Terry and become a ‘legend’ at Chelsea.

England international James starred in Chelsea’s Champions League victory over AC Milan on Wednesday night, scoring and providing an assist as Potter’s side ran out 3-0 winners.

Chelsea summer signings Wesley Fofana and Pierre-Emerick Aubameyang were also on target as the Blues recorded their first European win of the season.

Potter, who replaced Thomas Tuchel in the Stamford Bridge hot-seat last month, says he ‘loves’ working with James and insists his potential is ‘beyond the sky’.

The academy graduate, 22, has already racked up 132 appearances for Chelsea and won the Champions League at Stamford Bridge, while also reaching four Wembley finals.

‘I think Reece is just a fantastic player, and he’s a young player, so he’s developing all the time,’ Potter said after Chelsea’s emphatic victory over Italian giants AC Milan.

‘He’ll get better and better as we go. I’ve really enjoyed working with him, he’s got a lot to offer, he’s fantastic.

"We're just blessed with two great full-backs. Both of them are in the top five or six in the world." 🌟🌟@rioferdy5 and Joe Cole discuss why they think Reece James is currently ahead of Trent Alexander-Arnold, and the England line-up they'd use at the World Cup 🏆#UCLTONIGHT pic.twitter.com/E9dnSyV7x0

‘He could play any game in the world, he’s tremendous. My job is to help him reach his potential because his potential is beyond the sky.

‘We love him. He’s so important for us. My job is to help him reach his potential, and his potential is he can be a Chelsea legend.

‘That is the level he has, the potential that he has. For that to happen, he has to be part of a successful team. That’s what we’re working towards.’

Chelsea lost their opening Champions League fixture in Thomas Tuchel’s final game in charge but have taken four points from their last two games under Potter.

The Blues also snatched a 2-1 win over Crystal Palace in Potter’s first Premier League match in the Chelsea dugout.

Aubameyang, who scored his second goal for Chelsea following a deadline-day move from Barcelona, said: ‘It was not an easy game. They played well in the first half. Then we kept the intensity really high. We were confident.

‘I’m definitely enjoying myself here. I’m feeling good. I was very welcomed by all the players and staff.

‘The first goal was really important. It gave us strength and confidence to play the game. We knew what we had to do against Milan. They have great strikers as well. The defenders did an incredible job today.

‘It’s easier when you win games. The mood is very good at the moment. We’ll try to keep it up.’