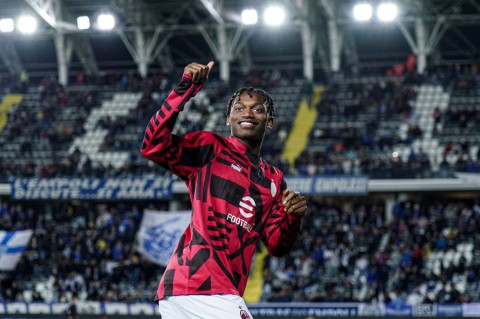 Chelsea are leading the race to sign Rafael Leao with Italian champions AC Milan demanding at least £87m for the winger, according to reports.

Leao has carried over his excellent form to the new campaign where he has four goals and seven assists across nine games in Serie A and the Champions League.

Corriere Della Serra are now reporting that Chelsea are ‘ahead of everyone’ in the race to sign Leao but the club will not consider selling him for less than £87m.

Leao attracted interest in the summer transfer window but AC Milan were adamant that he could only leave if his €150 million (£129.7m) buyout clause was met, though they now appear to have softened their stance.

Maldini has confirmed that Chelsea enquired about Leao’s availability in the summer but their approach was rejected.

“In terms of what happens in the future, who knows whether he can do this in Premier League or not.
He's got the capability, for sure”. pic.twitter.com/uZu6tcmjQu

‘We have already started talking to him. But not now, for a long time. Every renewal can be simple or complicated, the will of the player makes the difference because that of the club is there,’ Maldini told Sky Italy in September.

‘Renewal is an issue that we addressed many months ago.

‘Rafa knows that to become stronger than now the solution is to stay with us. We are a young and growing team.

‘He still has to learn many things but we intend to do great things and grow with him.

‘Chelsea’s officially written offer did not arrive but on an informal level it did. Of course, it was rejected.’

Leao joined AC Milan in 2019 from French club Lille and started his career in Portugal with Sporting Lisbon.