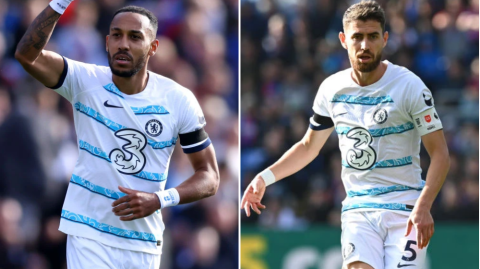 The sides met at Selhurst Park in Potter’s first Premier League game in charge of the Blues, which ended in a 2-1 victory for the west London club.

‘It was an important goal,’ Potter said when quizzed about Aubameyang, who returned to England on deadline day following a spell with Barcelona.

‘He has been working hard to get himself up to Premier League fitness and I have been really impressed with him.

‘But any forward will tell you it is important for them to score and it was an important goal for us.’

The 33-year-old Gabon international’s return to the Premier League was controversial given his exit from Arsenal in January – in which he fell out with boss Mikel Arteta and was stripped of the club’s captaincy over disciplinary issues.

He spent just six months at Barcelona – with his goals helping Xavi’s side qualify for the Champions League last term – but Barcelona’s perilous financial plight, added with the arrival of Robert Lewandowski, prompted them to sell him.

He is now up and running at new club Chelsea and will look to get on the scoresheet once again when the Blues return to action against AC Milan in the Champions League on Wednesday.

😂you can’t be serious – Jorginho literally broke the world record of amount of fouls committed before getting a yellow. https://t.co/TVNnv9LdLd

Parish posted on Twitter: ‘Jorginho literally broke the world record of amount of fouls committed before getting a yellow.’

He also took aim at VAR after Thiago Silva avoided a red card.

‘Honestly what is the point of #var we chop and change every week what it does what it thinks,’ Parish added.

‘#Var must surely think that’s a red but not a ‘clear’ error! Even if it’s not a #dogso [denying an obvious goal-scoring opportunity] which it is.

‘He handballs it twice deliberately, one we play on so two yellows! #cpfc #epl.’

Palace boss Vieira feels Silva was ‘very lucky’ not to be sent off for his deliberate handball.