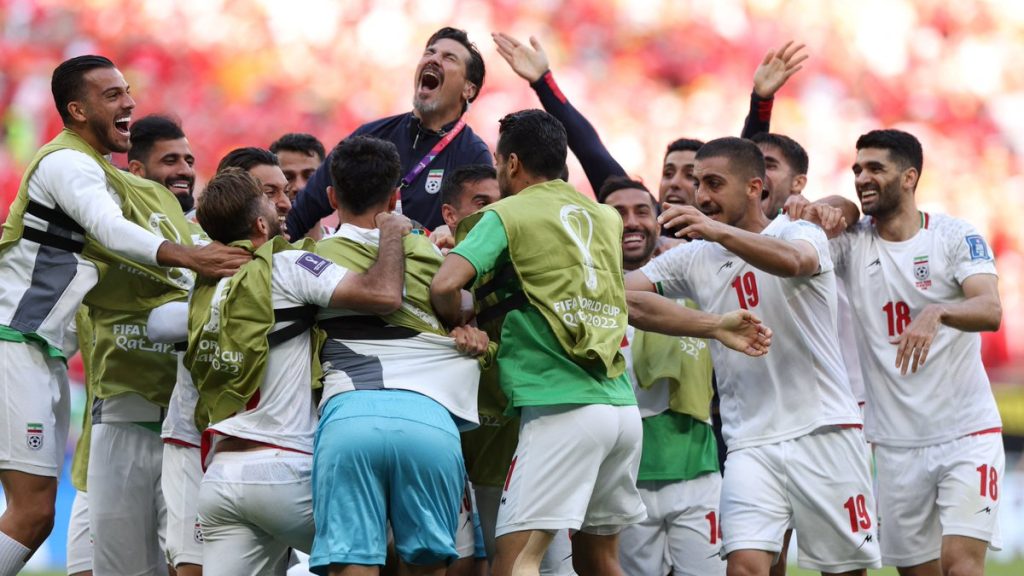 Wales’ World Cup 2022 destiny is out of their own hands after Iran struck two late goals to secure a dramatic 2-0 win over the 10-man Dragons in Group B at the Ahman bin Ali Stadium.

Carlos Queiroz’s side saw Rouzbeh Cheshmi break the deadlock in the eighth minute of second-half injury time before Ramin Rezaeian put the game to bed with 101 minutes on the clock, as Wales – who had Wayne Hennessey sent off – saw their hopes of a top-two finish take a major hit.

Rob Page elected to make one change to the side who drew 1-1 with the USA on matchday one, bringing in Kieffer Moore for Daniel James, and the Bournemouth man had a gilt-edged chance to open the scoring in the 12th minute.

Moore latched onto a cross from Connor Roberts but could only send a toe-poke into Hossein Hosseini’s arms from close range, receiving a boot to the face for his troubles, but he did not sustain any serious damage.

From nearly claiming an assist to nearly giving a goal away, Roberts then saw a long pass intercepted by Ali Gholizadeh, who combined well with Sardar Azmoun before tapping home in the 15th minute, but the goal was ruled out for offside.

Wales were grateful for that reprieve, but they were still living dangerously, struggling to retain possession and seeing Azmoun fizz a header just wide from a free kick in the 23rd minute.

Just before the break, Ahmad Nourollahi’s half-volley from range bounced awkwardly in front of Hennessey, but the Wales number one saved well as the game remained goalless after the opening 45 minutes.

Within just seven minutes of the second half, one of the most spectacular attacking episodes of the World Cup so far occurred, as Azmoun and Gholizadeh both struck the woodwork within a few seconds of each other before the former headed Gholizadeh’s rebound into the grateful gloves of Hennessey, who was still sprawled on the floor.

Speaking of players sprawled on the floor, Azmoun – who had just come back from a calf tear for the World Cup – went down on the turf more than once before somehow managing to carry on each time, but his race was run in the 68th minute as Karim Ansarifard replaced him.

The Dragons backline did well to quell a sustained period of Iran attacks in the second half, but in the 73rd minute, they were grateful to see Hennessey produce a brilliant fingertip save down to his right to turn Saeid Ezatolahi’s goalbound effort behind.

Hosseini was then called into action to tip a Ben Davies drive over the bar in the 83rd minute, but Wales were then dealt a killer blow not long after when Hennessey came out to challenge Taremi for a long ball and clattered into the Porto man with a raised leg.

The Nottingham Forest keeper was initially given a booking to the furore of Iran, but referee Mario Escobar upgraded his punishment to a red card after a brief look at the monitor in the 86th minute, as Danny Ward took on the responsibility of keeping Iran at bay for the final few moments.

Mehdi Torabi then sent a 20-yard effort just wide of the top corner in the 88th minute as Wales desperately clung on, but they would be forced to try to do so for another nine additional minutes.

After holding out for 98 minutes, however, Wales’ resistance was broken, as Cheshmi hit a magnificent long-range strike which sailed into the bottom corner.

Salt was rubbed into the wounds for Page’s side just two minutes later, as Wales threw bodies forward and were exposed on the counter, allowing Rezaeian to lift the ball into the back of the net over the onrushing Ward.

Iran – who face the USA on Tuesday – have now gone level on points with England before the Three Lions meet the Stars and Stripes this evening, while Wales sink to the bottom of the section and have it all to do in their final group fixture against England next week