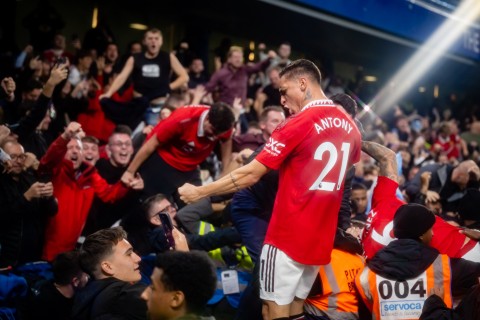 Chelsea appeared to be on course to secure all three points at Stamford Bridge as Jorginho’s penalty in the 87th minute gave the hosts a late lead.

But Casemiro’s excellent header from Luke Shaw’s cross in the 94th minute ensured Erik ten Hag’s side secured a point from the game.

Casemiro led the wild celebrations with United’s supporters in the away section at Stamford Bridge.

But before joining in with his teammates, television cameras caught Antony getting in Jorginho’s face as he ran away to celebrate.

That flashpoint came just minutes after Jorginho was booked for hacking down Anthony Elanga in order to stop a late United attack.

As he ran back to defend the free kick, Jorginho fell to the ground easily following a push from Lisandro Martinez, while Antony also had a few choice words for the Chelsea midfielder.

Antony winding up Jorginho after the equaliser from Casemiro 💉 pic.twitter.com/5cQt8DRzup

Speaking about United’s draw after the game, Ten Hag said: ‘That’s why I’m happy in this stage of the season with this point, when you are capable to fight back like we did.

‘We did it last week against Omonia to get the win, we did it against Chelsea after you are down, you give resilience.

‘You show resilience and that is a really big theme for big teams to have in your capabilities and also therefore that is what Casemiro, among others, is bringing into the squad and into this team.’