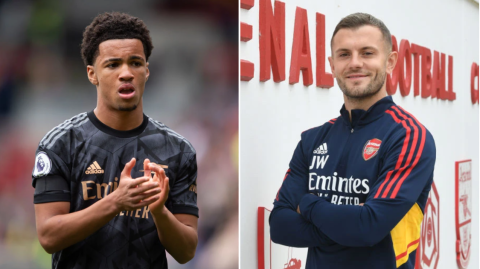 Jack Wilshere has offered some sage advice to Arsenal record breaker Ethan Nwaneri and encouraged him not to get carried away with all the attention that has come his way.

The teenager broke a host of records when he was subbed on in the last minute of Arsenal’s 3-0 win over Brentford earlier this month, becoming the youngest ever top-flight player at the age of 15 years and 181 days.

He also became Arsenal’s youngest Premier League debutant in the process, a record that was previously held by Wilshere.

The former England midfielder is now coaching the Gunners’ Under-18 side – the age group Nwaneri has recently stepped up to – and Wilshere has offered some pearls of wisdom to his young charge on how to deal with being suddenly thrust into the spotlight.

‘One thing that I learnt pretty quickly – maybe not quickly enough but looking back now I realise it – is there are a lot of people at the club who have his best interests at heart,’ Wilshere told Arsenal’s website when asked about Nwaneri.

‘He has to listen to them. He has to somehow block out the noise. I know he has a good family around him, which was important in my case as well.

‘Keep his feet on the ground. But he is the type of kid that will do that. He’s a really driven boy.

‘I think that [giving young players a chance] is part of the tradition of Arsenal Football Club.

‘It was a big day for the whole club and hopefully we can use it as inspiration for the boys at Hale End, but also for the boys here who get to experience training every day and trying to push with our first team.’

He added: ‘We need to give a lot of credit to everyone at Hale End. Everyone that’s helped him and supported him over the years.

‘There are some people who are really proud, and I’m one of them, but I’ve been around for a couple of months, and a little bit last season.

‘So let’s thank everyone down at Hale End for their support and their hard work. Now he’s part of my team, one of my players, so I will give him all the support and guidance he needs.’