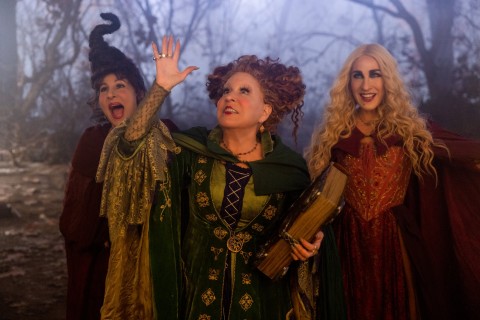 After waiting almost 30 years, Sarah Jessica Parker, Kathy Najimy, and Bette Middler return as the Sanderson Sisters in the eagerly anticipated sequel to the 1993 classic.

The film landed on Disney Plus today (and you can read our review here, where we gave it 3.5 stars) taking fans of the franchise back to Salem as the black candle is lit once more summoning the fabled witches to wreak havoc.

The film sees Parker, Najimy, and Middler reprise their roles as Sarah, Mary, and Winifred Sanderson alongside the likes of Whitney Peak, Belissa Escobedo, and Lilia Buckingham.

And as people flock to feast their eyes on the sequel, fans have excitedly taken to social media to wish others a ‘happy Hocus Pocus 2 day’ while praising the installment.

‘I loved this movie I’m rewatching it again. It made me tear up this movie was absolutely beautiful!!’ One fan posted to Twitter.

Another added they were ready for another sequel, writing: ‘GIVE ME 3 ALREADY!!’

’29 years I’ve waited for #hocuspocus2 my childhood is complete,’ another said.

Hocus Pocus 2 is so nostalgic

#HocusPocus2 was a fun movie that's full of nostalgia and lots of comedic bits. There's a lot of heart to it and themes of family/covens. It feels like they are setting this up for another movie or TV series and with how they world built in this movie, I'd love to see more. pic.twitter.com/0yj6xW0dIO

#HocusPocus2 was really good. !!! I loved it

Campy as the first one with some fun new characters. But I definitely needed more Hannah Wasdingham… especially more of her ‘Come Little Children’.

Many commented on how emotional the film was, claiming by the final scenes they were in tears.

‘I cried at the end but I loved it. I really really did. The homage to the original. The opening was magical. Bravo SANDERSON sisters,’ one user posted.

Another said: ‘No I’m actually crying my eyes out at #HocusPocus2.’

‘I cried watching #HocusPocus2 and I wasn’t expecting that,’ a third user posted.

‘Was not expecting to cry but that was a gorgeous film #HocusPocus2,’ another posted.

Just finished #HocusPocus2 it was really good. Something I’ll definitely watch over like the first one.

Bruhhhhh I know this is for kids but they did a great job bringing the nostalgic back. A lot of references and it feels like the old one too! LOVED this movie, the OG will always be the OG tho, but came preeetty close. #HocusPocus2

I really enjoyed watching #HocusPocus2    like wow! It felt so Halloweeny that I had a smile the whole time! Definitely feels different than the first one but really enjoy it and hope for a third film!!

Director Anne Fletcher previously revealed that making a sequel to the movie was ‘daunting’.

Speaking to SFX Magazine she said: ‘It’s a daunting task to take on something like this with the fandom because you don’t want to blow it,’ she told SFX Magazine.

‘It is very scary, I’ve never done a sequel.’

She added that she agreed to do the film as it gave an insight into the Sanderson sisters’ backstory and their time as young witches.

‘Those are the things that I love the most – within the grounding you can be silly and stupid, and over the top and crazy,’ she added.

“But now the fans get a little peek into the earlier years of our witches. Which to me is a blast. So I took the movie for that particular reason.’

Hocus Pocus 2 is available to stream now on Disney Plus.