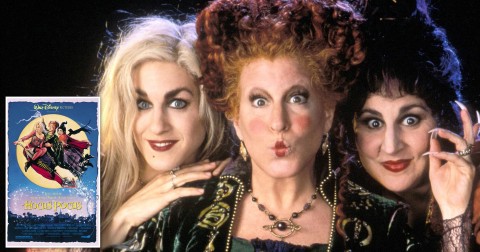 As the spooky season begins and All Hallows’ Eve draws closer, witchy minds are contemplating the upcoming release of Hocus Pocus 2.

The original leading cast of Bette Midler, Sarah Jessica Parker and Kathy Najimy are all returning as the Sanderson sistaaaahs, ready to run amok once more in Salem in 2022.

Disney’s Hocus Pocus 2 sees us leave behind the days of Max, Dani and Allison, and this time it’s Becca (Whitney Peak), Izzy (Belissa Escobedo) and Cassie (Lilia Buckingham) who unwittingly bring back the infamous, child-hungry witches in search of eternal youth on Becca’s 16th birthday.

As they rush to save their Massachusetts hometown, there’s sure to be plenty of magic and, we hope, a touch more music like the original film’s fabulous I Put A Spell On You number.

If you’re ready to dust off the cobwebs with a re-watch of the first Hocus Pocus movie, we’ve got the lowdown below on how, where and when.

How to watch the original Hocus Pocus movie?

The original film fuels all that childhood Hallowe’en nostalgia

The original camp, cult classic, as a product of its time, was first available on VHS back in the day (remember those?) and eventually DVD.

That was the way most fans could get their fix of the Hallowe’en favourite, which steadily grew in popularity over the years, having never been anticipated as any sort of hit movie.

However, taken to heart by kids, and re-powered by a healthy dollop of nostalgia, it has stayed highly regarded.

What happens when you don’t eat children and you’re a Sanderson sister, unfortunately

Luckily for us, since the the introduction of Disney Plus to the UK in March 2020, Hocus Pocus can be streamed to your heart’s content, along with a vast swathe of other content from the company’s vault, at no additional cost for any Disney Plus subscribers.

If you don’t have Disney Plus, fear not, as you’re not entirely out of choices.

The film is also available to purchase as a digital copy from Amazon Prime Video.

When Hocus Pocus comes out?

It’s been nearly three decades since we first met Mary, Winifred and Sarah!

As the official synopsis confirms, Hocus Pocus 2 is set in the modern day and it’s been almost three decades (how?) since we were first advised to lock up our children in the face of Winifred, Sarah and Mary Sanderson.

It reads: ‘It’s been 29 years since someone lit the Black Flame Candle and resurrected the 17th-century sisters who were executed for practicing witchcraft, and they are looking for revenge.’

Yep, the first Hocus Pocus movie, directed by Kenny Ortega, originally came out in 1993 – and, naturally, in the month of October.

With the sequel’s release finally looming, there’s just enough time to get reacquainted with Thackery Binx, Billy Butcherson and the gang before the pesky Sandersons reawaken.

Hocus Pocus 2 premieres on Disney Plus on Friday September 30.