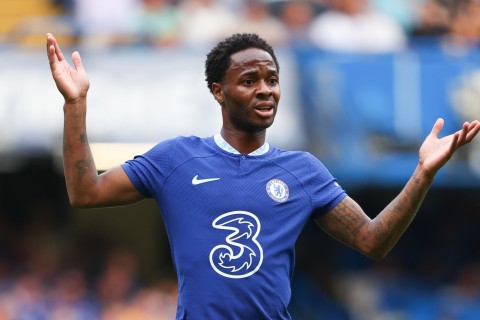 William Gallas believes Graham Potter has already created a ‘problem’ with Raheem Sterling at Chelsea by playing him out of position.

Potter has only been in charge for one game since Chelsea’s decision to sack Thomas Tuchel, which was the 1-1 draw with Red Bull Salzburg in the Champions League.

For that match, Potter opted to play Sterling on the left flank, with Marc Cucurella, Thiago Silva and Cesar Azpilicueta forming a back three.

And Gallas admits he does not understand Potter’s thinking behind where to play Chelsea’s £50 million summer signing from Manchester City.

‘That is a problem. When I saw Sterling playing as left wing-back, I didn’t understand it,’ Gallas told Genting Casino.

‘It’s difficult for me to understand why he wants to experiment with something like this, especially in a Champions League game. You are playing at home and you put Cucurella as a centre-back, you have Fofana on the bench with Koulibaly, Chalobah on the bench, and you put Sterling as a left-wing back? I don’t understand.

‘In the end, they didn’t have a good result, they drew 1-1. People will always judge the result, and the question is why did he put those two players in those positions?

‘Graham Potter seems like a nice guy and a good manager, but I’m still waiting to see what he’s going to do to get Chelsea back to top form.

‘He looks very calm, and looks like he likes to have conversations with his players from what I see from the outside, but I don’t know if he’s like this in reality. I’m still waiting.

‘He did a good job at Brighton, but Chelsea is not Brighton, he has gone to another level with more expectations, more pressure, so it will be good to see if he can be the right manager.’