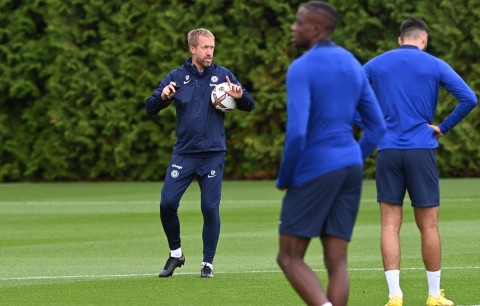 Graham Potter has been impressed with Armando Broja during his first full week at Chelsea, according to reports.

Potter replaced Thomas Tuchel as manager but could only guide Chelsea to a 1-1 draw in his first match against Red Bull Salzburg in the Champions League on Wednesday evening.

The former Brighton boss now has an extended period to work with his players as Chelsea’s Premier League fixture against Liverpool on Sunday has been postponed, meaning that they are next in action after the international break when they travel to Crystal Palace on October 1.

But according to The Sun on Sunday, Potter has already been impressed with the 21-year-old’s performance levels in training.

The report claims that Chelsea insiders say Potter has been ‘raving about Broja’s potential and ability to fit into his system’.

Earlier this month, Broja signed a new deal with Chelsea which keeps him tied to the club until 2028.

Speaking about Aubameyang’s arrival at Chelsea in the closing stages of the summer transfer window, Broja insisted that he is keen to learn from the former Barcelona striker.

‘He is a great player,’ said the Albania international.

‘He has done a lot in his career so far and now he has come to Chelsea I can learn a lot from him.

‘He has done it at Arsenal and Barcelona, so he is a good addition to the club and the team and he seems like a very good guy.

‘I am excited to learn off him and a few things he has learned. It is good to have that competition in the team.’