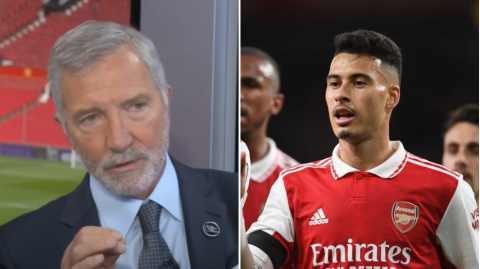 Graeme Souness has warned Liverpool about the threat of Gabriel Martinelli as Jurgen Klopp’s side prepare to meet Premier League leaders Arsenal.

Liverpool face the unenvious task of taking on Arsenal in their own back yard on Sunday as the Emirates Stadium plays host to a mouth-watering Premier League clash.

Arsenal have won nine of their first 10 games this season to climb to the top of the English top-flight, one point ahead of defending champions Manchester City.

Mikel Arteta’s side will look to make it five wins in a row this weekend, having dropped just three points all season, losing at Manchester United last month.

Souness believes Liverpool are facing their ‘biggest test’ since Klopp’s appointment in 2015 and admits things won’t get much easier as they prepare for a clash with in-form Arsenal.

The legendary Scottish midfielder says his former club will need to pay particular attention to Brazilian winger Martinelli, who he says is destined to be a ‘real player’.

Martinelli has been in brilliant form for the Gunners and will relish the chance to expose Trent Alexander-Arnold’s well-documented defensive deficiencies.

Writing in a column for the Daily Mail, Souness said: ‘We will see in the next eight days, with the game at Arsenal on Sunday and Manchester City at Anfield next Sunday, how Liverpool’s players deal with the biggest test they have known as a group.

‘Gabriel Martinelli will be a big part of the threat to them at the Emirates. He has great feet and looks to me like he’s going to be a real player. Trent Alexander-Arnold will need help from his centre halves and midfielders.

‘It’s at times like this you really find out what you’ve got in the dressing room. You find out about who’s getting changed next to you every day of your working life.’

Speaking at his pre-match press conference on Friday, Klopp said: ‘All my respect, wow! Really good job from Mikel. When you need time, nobody wants to give you it.

‘I have to say, a lot of respect. A lot of talent… Martinelli, I was excited about him early, Odegaard, I spoke to him at 15 in Norway with his dad. Saka… oof.

‘And Gabriel Jesus, Mikel could see how good he could be not in a Man City shirt. Thomas Partey, everyone saw how good he was at Atletico Madrid.

‘Lots of quality. A young, exciting team doing really well. Now we go there and we don’t think about [past results].’