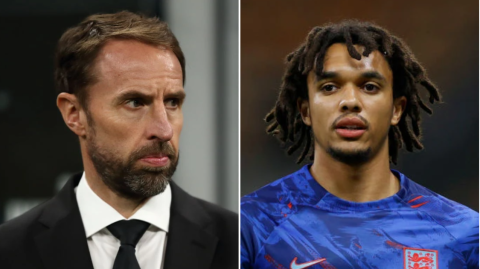 Gareth Southgate says the door is not closed on Trent Alexander-Arnold making England’s World Cup squad later this year despite being omitted from the matchday squad against Germany on Monday night.

The Liverpool defender, who missed last year’s Euros though injury, has only made one international appearance in 2022 and was an unused substitute against Italy in Friday’s defeat at the San Siro.

Despite Kyle Walker coming out of the starting XI, Alexander-Arnold did not even make the bench on Monday with the right-back one of four players missing out on the 23-man squad alongside Fikayo Tomori, Jarrod Bowen and James Ward-Prowse.

But Southgate gave a firm ‘no’ when it was suggested that the Liverpool star’s World Cup hopes may be dwindling and insists his latest snub was simply down to Reece James and Kieran Tripper being in better form.

Asked about Alexander-Arnold’s omission, Southgate told Channel 4: ‘I mean, we’ve got a big squad with us and we’ve got four right-backs who are super quality.

‘At the moment Kieran Trippier is playing exceptionally well and Reece James has been one of the outstanding players in the Premier League at the start of the season.

‘But Trent is a very, very good footballer and that’s why we picked him in the [initial] squad.’

Southgate named a similar side to the team that lost to Italy, with John Stones picked in the right centre-back role and Luke Shaw – who was subbed on in Milan – starting in place of Bukayo Saka at left wing-back.

‘We’ve got some good options there [at left-back]. Luke came into the game well the other night and it is a good opportunity for him tonight. He is a super player,’ Southgate explained.

‘We thought [Eric Dier] coming back into the side did really well and we wanted to keep that momentum going. He hasn’t been with us for a while.

‘John [Stones] is fresh but Kyle [Walker] has been out for a while so we felt it made sense to freshen that up tonight.

‘We wanted to move the bench around a bit tonight. We took a big group, which has been great on the training pitch.’