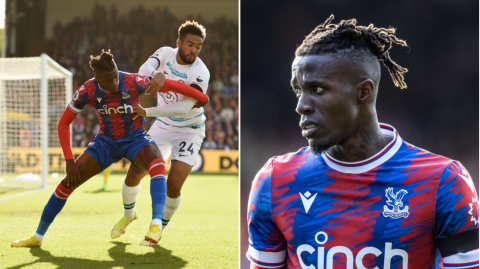 Wilfried Zaha has hit back at Reece James in a now deleted social media post after the Chelsea defender posted a somewhat inflammatory message of his own following Saturday’s dramatic win.

Crystal Palace took an early lead at Selhurst Park through Odsonne Edouard but were pegged back shortly before half-time as Pierre-Emerick Aubameyang netted his first goal for the Blues.

Both teams had chances to find a winner but it was Connor Gallagher – who spent last season on loan at the south London club – who secured all three points at the death.

Zaha had a quiet game by his usual standards, managing just one shot in the match and only one successful dribble as James kept him under wraps – even forcing the Ivory Coast star to switch to the opposite flank at one point.

After the match, James seemed to revel in the defensive number he did on Zaha and posted a picture of the two players on his Instagram page along with a ‘lock’ emoji, referencing how he had locked down his opponent.

But Zaha seemed to take umbrage with the post and appeared to reference it in a message of his own he posted on his Instagram stories – which has since been deleted.

The 29-year-old, who had also been inundated with messages from Chelsea supporters on his social media pages claiming he had been pocketed by James, wrote: ‘Clout’s a hell of a drug lol but y’all be safe.’

After deleting the message, he put up a tamer post reflecting on the defeat which simply read: ‘Win some, lose some. We look forward to putting it right next weekend.’

Chelsea’s 2-1 win was Graham Potter’s first victory in charge of the west London club and the new manager was delighted to bank three points particularly having been forced into a formation change.

‘On a personal level, it’s nice to get the first win under the belt,’ said Potter after the game.

‘I’m really pleased for the players. The pattern away from home has been starting well, conceding and then not getting any points. They could have felt sorry for themselves, but they didn’t.

‘They kept pushing. It was a tight game. We’ve edged it, it could have gone either way but that’s how difficult it is here.