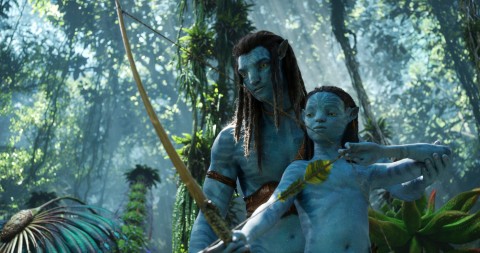 It’s been 13 years since James Cameron first introduced us to Avatar – which, since its release in 2009, has gone on to become the highest-grossing movie of all time.

And given how popular it is – having taken a staggering $2.9billion (£2.4bn) since its original release – it’s no surprise that director James Cameron is taking us back to the mystical planet of Pandora in a long-awaited sequel, Avatar: The Way Of Water.

A recent teaser trailer instantly transported us back to the stunning world that the Sully family inhabit, and reintroduced to Jake (Sam Worthington), Neytiri (Zoe Saldana) and their brood of children.

It’s sure to be epic – and is set to dominate the box office – but just when is it due out in cinemas? And what’s the running time for the director’s latest effort?

Here’s what you need to know…

When is Avatar: The Way Of Water released?

Avatar: The Way Of Water will be released in cinemas on Friday December 16.

The sequel has taken 13 years to make it to the screen – with James Cameron recently speaking about the huge gap between the two,how time-consuming the whole project has been, even going so far as to scrap one script he had been working on for a year and start again.

‘All films work on different levels. The first is surface, which is character, problem, and resolution,’ the filmmaker told the Times.

‘The second is thematic. What is the movie trying to say? But Avatar also works on a third level, the subconscious.

‘I wrote an entire script for the sequel, read it, and realized that it did not get to level three.

‘Boom. Start over. That took a year.’

What is the running time of Avatar: The Way of Water?

This one’s got a pretty epic runtime, with the film reportedly clocking in at three hours and 12 minutes.

That makes it almost half an hour longer than its predecessor, which ran for an impressively lengthy two hours and 41 minutes.

What’s the plot of Avatar: The Way Of Water?

The official synopsis reads: ‘With Avatar: The Way of Water, the cinematic experience reaches new heights as Cameron transports audiences back to the magnificent world of Pandora in a spectacular and stirring action-packed adventure.

‘Set more than a decade after the events of the first film, Avatar: The Way of Water begins to tell the story of the Sully family (Jake, Neytiri, and their kids), the trouble that follows them, the lengths they go to keep each other safe, the battles they fight to stay alive, and the tragedies they endure.’

Who is in the cast of Avatar: The Way Of Water?

The film sees Sam Worthington and Zoe Saldana return to their original roles of Sully and Neytiri, while other returning cast members include Stephen Lang, Sigourney Weaver, Joel David Moore and Giovanni Ribisi.

New cast members, meanwhile, include Kate Winslet – playing a new Na’vi character named Ronal – as well as The Sopranos’ Edie Falco, Fear The Walking Dead’s Cliff Curtis and Flight Of The Conchords/What We Do In The Shadows star Jermaine Clement.