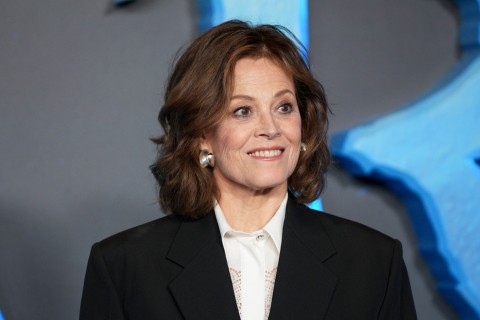 The 73-year-old actress, who portrays Kiri, a Na’vi 59 years younger, in the long-awaited sequel to 2009’s Avatar said she used her memories of being ‘self-conscious’ but imaginative at the same age to drive her performance.

‘I usually wore black turtlenecks and an olive-green suede jumper/tunic thing. It was kind of like a beatnik outfit, I guess,’ she recalled.

‘I think it’s a great age, you know? Kids are so imaginative at that age – they’re so sensitive, easily hurt, easily thrilled and they see things so clearly. I tried to allow that self-conscious, awkward energy [I had] to flow into the character.’

Sigourney starred in the original Avatar film but her character Grace, a scientist, was actually killed off towards the end of the movie.

However, she had every confidence in director James Cameron when he pitched an idea for her to return to the franchise in a different way, as the adoptive teenage daughter of Jake (Sam Worthington) and Neytiri (Zoe Saldana).

She plays Na’vi Kiri, the14-year-old daughter of the film’s leads

She told You magazine: ‘I thought, “Well, Jim is smart. If he thinks I can do this, let’s give it a whirl!” I don’t think John Wayne was asked to play a 14-year-old when he was in his 70s. It’s something new.’

A lot of the film is set underwater so the cast underwent a year of free-diving training with US Navy Seals and Sigourney can now hold her breath for six and a half minutes while submerged, falling just short of her co-star and breath-holding champ Kate Winslet, at shade over seven minutes.

The Aliens actress, who first worked with director Cameron on that 1986 sequel to Ridley Scott’s original, is very proud of her work, admitting she has had ‘exactly the career [she] wanted’, although she insisted that doesn’t mean she has ‘all the answers’.

She previously revealed she had also spent time hanging out with teenage girls in preparation for the role of Kiri.

‘There was lots of eye-rolling, which I know well from my own girls when they were teenagers, completely psychotic’ she revealed to Empire magazine.

Cameron added that her workshopping with the teenagers had been a huge success, saying that she was even looking younger and having more energy, as well as having a ‘lightness in her step and a fun spirit’.

Other actors joining the cast include Vin Diesel, Michelle Yeoh and Michelle Rodriguez.

Avatar: The Way of Water is scheduled for release this month, with the third, fourth and fifth films planned for December 2024, December 2026 and December 2028.