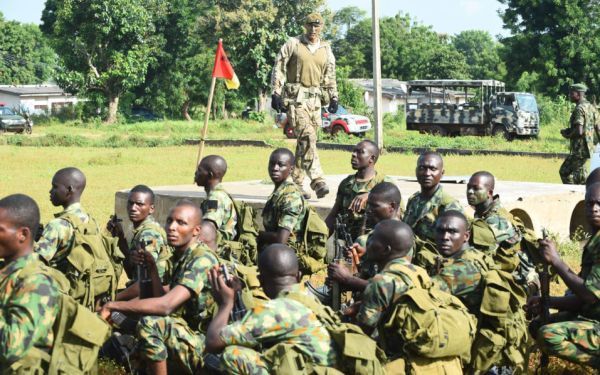 Boko Haram terrorist commander Alhaji Modu has been killed along with 27 other terrorists in an airstrike by troops of the Operation Hadin Kai Air Task Force in Borno State.

Also known as Bem Bem, Modu and his gang members were neutralized around Mandara mountains in Gwoza Local Government Area of the State.

Military sources disclosed that the operation was coordinated following credible intelligence reports which revealed that the Islamic State of West Africa Province (ISWAP) fighters had converged in large numbers in the area in readiness to launch fresh attacks in some areas.

According to reports, Modu, formerly a robber and drug baron before he joined the terrorist group, led the attack and displacement of Baa on Thursday March 6, 2014.

He killed hundreds of innocent citizens in the town before declaring it a Boko Haram caliphate. He has also been coordinating attacks around Cameroon and Niger Republic.

However, while filling this report, in what seems to be a twist to the development, some gunmen suspected to be bandits have raided and killed three residents of Bali town, the headquarters of Bali Local Government Area of Taraba State.

The attack also led to the abduction of an unspecified number of people through a nearby bush path by the gunmen.

Sources within the town disclosed to our correspondent that personnel of the Taraba Marshall, a security outfit of the state government at a checkpoint close to the general hospital, was the first victim before they attacked houses killing two people and abducting many others.

The source also revealed that the attackers came on motorbikes, shooting into the air to scare residents and security operatives.

The leader of the Tiv cultural group in the Bali local government area, David Zaki, who lost two of his tribesmen, stressed that those abducted are mostly women.

Zaki said that the attackers stormed the area Sunday night at about 11:00 pm.

Two other victims who were badly injured are receiving treatment in an undisclosed hospital.

While describing the occurrence as terrible, the Tiv leader wants the government and security operatives to rise up to the occasion to forestall a recurrence.

“This is terrible, can you imagine that for more than three hours, the bandits were in total control of the Bali town and no confrontation from security agencies? What a country,” he said.

Police authorities are yet to, however, confirm the incident.