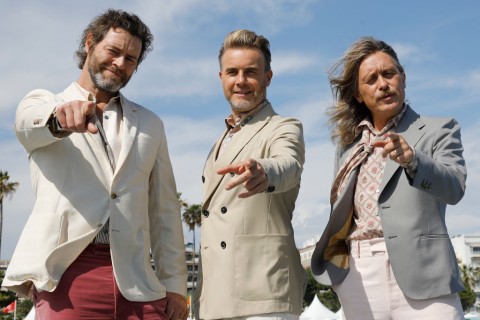 Gary Barlow said his boyband Take That has started writing their first album in five years, in news which is sure to thrill their fans.

The singer and former X Factor judge, 51, will be joined by fellow bandmates Mark Owen and Howard Donald in the studio.

The group, now a trio following the departure of Robbie Williams and Jason Orange, last released an album in 2017.

‘We have started a little bit of writing, but we’re not due to officially start until the New Year,’ Gary teased.

‘Hopefully [there will be an album out] next year, but we’ve got to write some hits,’ he told Zoe Ball on her BBC Radio 2 Breakfast Show.

Just days ago, fans were wondering online about the likelihood of a new album, with one lamenting: ‘@GaryBarlow Have you made a start on the new Album yet with @HowardDonald and @OfficialMarkO it’s been soooo long x’

Another asked: ‘Will Take That make a new album soon?’

Gary, who was also joined by Mark, 50, and Howard, 54, to talk with presenter Zoe Ball, also spoke about Take That headlining the British Summer Time festival in Hyde Park next summer.

‘[We’re] very excited. We worked it out, it’s been seven or eight years since we’ve been their last [at BST] …and it was awesome last time,’ he said.

‘So when we were offered it, we were like yes, let’s do it.’

They will be joined by chart-topping Irish band The Script, who they have played with before, and the recently reformed classic line-up of Sugababes on Saturday July 1.

Singer-songwriter Gary also spoke about his current touring show, A Different Stage, where he performs as a version of himself in the one man autobiographical show and sings Take That songs.

‘It’s been lovely actually, really lovely. This show’s been different then a music show, it’s been thrilling and kind of new for me.’

The band also revealed that Greatest Days, the movie version of stage musical The Band, will be out in May next year.

The jukebox musical has music and lyrics by Take That, and stars comedians Aisling Bea and Jayde Adams alongside Alice Lowe and Matthew McNulty.