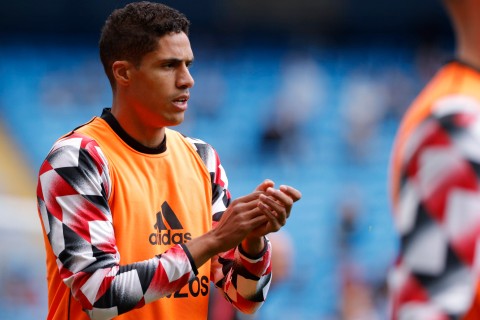 Raphael Varane will undergo a scan on his ankle injury on Monday after being forced out of Manchester United’s 6-3 defeat to Manchester City on Sunday.

Erik ten Hag’s side were convincingly beaten at the Etihad Stadium as hat-tricks from Erling Haaland and Phil Foden sealed a deserved win for the Premier League champions.

Varane, meanwhile, rolled his left ankle in the first half and was replaced by Victor Lindelof after just 40 minutes.

According to L’Equipe, Varane has suffered a sprain and will undergo further tests on Monday once the swelling has reduced in order to determine the extent of the injury.

But Ten Hag now faces issues at the heart of his defence as United are already without Harry Maguire, who missed the derby against City due to a hamstring injury.

United now face a trip to Cyprus this week as they play Omonia Nicosia in the Europa League on Thursday evening.

Speaking after his side’s heavy defeat to City, Ten Hag rejected suggestions that he should punish his players in the same manner as he did after their 4-0 defeat to Brentford in August.

After the loss to Brentford, Ten Hag ordered his players to run 13.8km in training the following day.

‘The punishment had a reason – they outran us, we didn’t work hard enough,’ Ten Hag said.

‘It’s not always about punishment. Of course, we have to criticize, criticize each other, so I didn’t get the message right to the players, quite clearly, to get them to believe on the pitch and from there on we didn’t come in our game, our way of playing.

‘That’s disappointing, but it’s good it happens against City, but then you get quite clear what the problems are when you don’t bring it.’