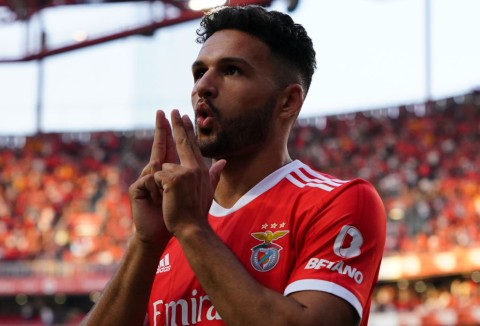 Manchester United are reportedly set to battle several of Europe’s biggest clubs for the signing of Benfica striker Goncalo Ramos.

Erik ten Hag is keen to bring a new No.9 to Old Trafford as he continues his rebuild of the Red Devils.

With Cristiano Ronaldo out of favour and Anthony Martial struggling for fitness, Marcus Rashford has been more heavily relied on and while the England international has performed very well, Ten Hag will want to bolster his forward options come January.

And according to Portuguese news outlet JN, via the Sun, Ramos has been identified as a transfer target when the window re-opens.

The 21-year-old has enjoyed a great start to the season, scoring eight goals in 12 games across all competitions, filling the void left by Darwin Nunez who joined Liverpool from Benfica over the summer.

The 6ft 1in striker has also scored 14 goals in 18 appearances for the Portugal U21s but is yet to make his senior international debut.

Benfica will consider offers of around £35million for Ramos, whose contract runs until 2025.

United may face stiff competition for the player however, with several big clubs around Europe also keeping tabs on Ramos, including PSG, Bayern Munich and Newcastle.

United have already spent £216m this season to bring in the likes of Antony, Casemiro, Lisandro Martinez and Tyrell Malacia.