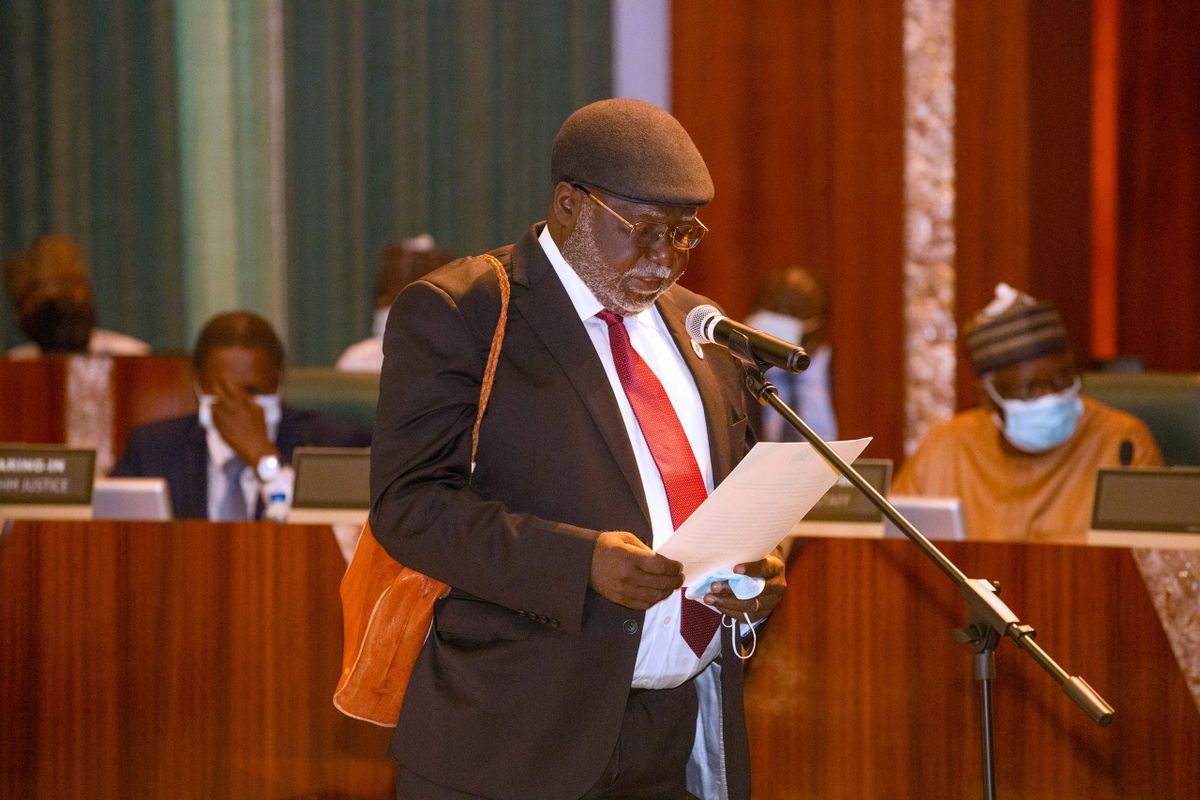 The Chief Justice of Nigeria (CJN), Justice Olukayode Ariwoola says Nigeria is at a crossroad and needs the service of honest judges who would promote the rule of law.

Ariwoola said this at the swearing in of the newly appointed Acting President of the Customary Court of Appeal of the Federal Capital Territory (FCT), Justice Stanley Lawal.

”Nigeria is currently plagued with myriad of problems that require sincere and honest interventions of judicial officers.

“We hear of corruption of various forms, killings, kidnappings, armed robbery, banditry, and all forms of terrorism against the state and individual citizens.

“Most often, these cases find their way to the court for the right and proper adjudication.

“At the two lower rung of the judicial ladder, you are there to represent our interest and crystalise the image of the Nigerian Judiciary by doing justice to all matters that Come before your Lordship”.

”A lure with unmerited material possessions will not only weaken your reputation but equally impair your sense of judgment,” he said.

He said that was not his wish for the newly appointed judge.

The CJN advised him to always be very careful and vigilant too.

“In everything you do in the course of adjudicating, you must consult your God, the Constitution and your conscience.

“Always have at the back of your mind, as I believe you had always, that at every point of your life, someone somewhere is right behind you and taking note of all your conducts.

“We often hear of all manners of underhand dealings by some judicial officers, especially at the lowest rung of the ladder.

“I will like your Lordship to remember that destiny has placed this enormous responsibility on your shoulders to lead your brother Judges and the entire staff of the Customary Court of Appeal of the FCT.

He, therefore, asked his Lordship not fail nor falter.

“At the crossroads we have found ourselves in Nigeria today, we are earnestly and passionately looking for a crop of judicial officers who will be role-models that can confidently hoist the banner of honesty, integrity and uprightness.

“The current state of affairs in the country needs nothing short of that. You must endeavour to prove your adjudicatory and administrative ingenuity to earn a lasting reputation in the annals of the Nigerian judiciary.

“This is a mandatory exercise that requires to align the conscience of our judicial officers with good conduct, fear of God and the Constitution of the Federal Republic of Nigeria to which we have all solemnly sworn to uphold under any condition.