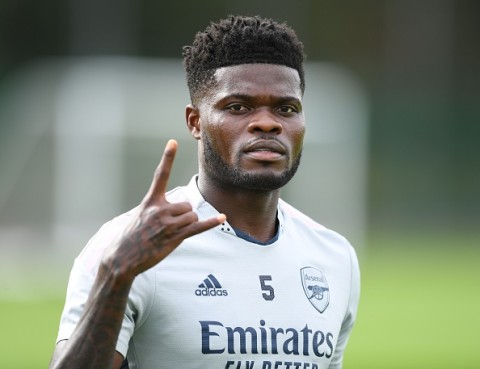 Arsenal may be in ‘trouble’ for Saturday’s north London derby against Tottenham at the Emirates, former Gunner Mikael Silvestre has warned.

Mikel Arteta’s league leaders head into the crucial fixture with injury problems, with question marks over Thomas Partey after he picked up a minor knee issue.

The Gunners have beaten Crystal Palace, Leicester City, Bournemouth, Fulham, Aston Villa and Brentford so far this term but lost their only other game to Manchester United.

They face another huge test when they host unbeaten Tottenham this weekend, with Antonio Conte’s third-placed side able to leapfrog Arsenal with a victory.

Silvestre has warned that Arsenal could struggle without midfielder Partey, who the Gunners are hoping will be fit to return in time.

‘He (Thomas Partey) is a big piece of the puzzle for Mikel Arteta,’ Silvestre told bettingexpert.

‘Arsenal is showing they are stretched as soon as there is an injury to Xhaka or Partey. They are short on bodies so it could be problematic this season.

🚨| Arsenal are hopeful Thomas Partey will be fit in time for the north London derby on Saturday lunchtime.

Partey is back at Arsenal after leaving the Ghana squad after picking up a minor knee injury in the warm up shortly before their friendly against Brazil. pic.twitter.com/MweyHAdNYK

‘Partey is showing he is good on the ball. He has got that physicality that is needed in the middle part, he is making challenges.

‘So if he doesn’t play, that is trouble for Arsenal.’

Silvestre feels that Partey should not be replaced by youngster Albert Sambi Lokonga for the north London derby.

‘He (Albert Sambi Lokonga) is still learning and adapting to the Premier League,’ Silvestre added.

‘He is showing a lot of focus and dedication. So, he can step up and fill Partey’s boots but still, it is asking a lot from a young player.

‘When you play those types of games, the derbies, it can be repressive sometimes.

‘But he was a captain at Anderlecht. I think he knows how to deal with this situation, even though he is still a young player.’