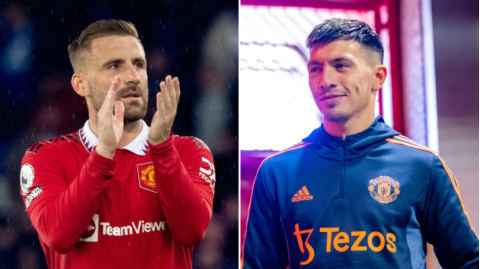 Luke Shaw has praised the impact Lisandro Martinez has made since joining Manchester United in the summer and feels having a fellow leftie next to him is a big advantage.

There had been some question marks about the £55million addition from Ajax after United lost their first two Premier League matches against Brighton and Brentford, with a host of pundits suggesting his lack of height could be a big problem.

But he has since helped the side keep three clean sheets in their next seven matches and become an instant fans’ favourite, with the six goals shipped at the Etihad the only blotch on his copybook.

Shaw has come back into United’s backline in recent weeks and is enjoying playing alongside the Argentine and believes he has made a superb start to life at Old Trafford – and can get even better.

Asked what it is like playing alongside Martinez, Shaw told reporters after Sunday’s stalemate with Newcastle: ‘Unbelievable, to be honest.

‘You can see everyone loves him. The fans love him. His left foot is unbelievable.

‘I think it always helps when you play with a left-footer on the side because he naturally likes to come out to that side, and I think he has fitted in really well.

‘Of course, he can keep getting better and better, but for me so far, he has been unbelievable this season. He needs to keep that up.

‘His aggression, his passion, we need him in that backline. He brings that every game. I am really pleased to have him in the team.’

Shaw briefly lost his place in Erik ten Hag’s side to summer signing Tyrell Malacia, though the England international says the United boss was right to drop him and he has worked hard to win back his starting berth.

He continued: ‘To be honest I didn’t really need him to say anything to me. I knew the first two games were nowhere near good enough.

‘I completely understood that it was my time to come out of the team. The results were bad, my performances were not good enough.

‘I just had to keep training hard every day so the manager could see how hard I was working. I was just waiting for my opportunity and had to bide my time because the team were doing well and we were winning.

‘You can’t moan, I just had to be there every day with the team, being involved and helping the team, whether that is starting or being on the bench.’