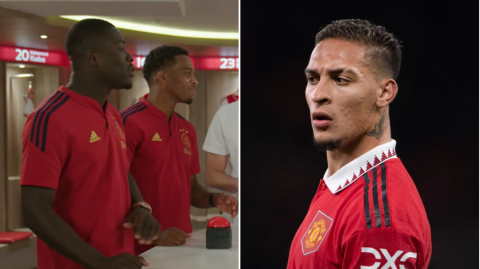 Manchester United spent most of the summer trying to prise the Brazilian winger – who even skipped training in an effort to force a move – away from Ajax and eventually agreed an £85million deal shortly before the window closed.

The Eredivisie champions were far from happy with the nature of Antony’s departure, particularly having also lost Lisandro Martinez to the Red Devils earlier in the summer.

But Bassey, who moved to Amsterdam from Rangers, appeared oblivious to the saga that had engulfed Antony’s switch to United and even seemed to forget he was no longer at the club.

The former Leicester defender took part in a FIFA23 video alongside fellow summer signing Steven Bergwijn as well as Brian Brobbey and Jurien Timber – both of whom snubbed approaches from United – in which they had to guess their team-mates’ FIFA cards.

During one round, the quartet were shown a series of FIFA cards through the years which all related to one player and had to guess which of their team-mates’ careers it was.

Looking at one ‘evolution’ that went from a 62-rated bronze card to a 79-rated gold – with pace and dribbling as the highest two attributes – Bassey felt there was only one player it could be.

The players had to guess their team-mate from their old cards.

‘Antony!’ yelled out the defender – oblivious to his faux pas – only to be greeted with disbelief and disdain from Brobbey and Timber while Bergwijn gave a worried glance behind the camera at the mention of someone who is now persona non grata in Amsterdam.

Brobbey and Timber both pulled faces, saying ‘Antony?! No!’ in unison to shut down Bassey’s guess, while the striker also made a motion with his hand as if to warn his team-mate about mentioning the Brazilian.

The player in question was eventually revealed to be Owen Wijndal, which prompted more consternation as Brobbey argued about his own lack of pace compared to the left-back.

Both Brobbey and Timber could also have joined Antony, Lisandro Martinez and, of course, old boss Erik ten Hag at Old Trafford with the Dutch coach trying to raid Ajax for a host of players this summer.

Centre-back Timber was the first player United made a significant play for, with his agent spotted at the club’s London offices early in the summer, but he was warned against a move to the Red Devils by Netherlands boss Louis van Gaal and ultimately decided not to put his World Cup place at risk.

Brobbey would have been a simpler deal given that he was at RB Leipzig and Ten Hag messaged him to see if he would be interested in reuniting at Old Trafford, but the young forward instead decided to return to Amsterdam.