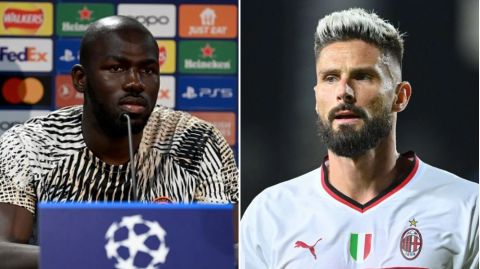 Kalidou Koulibaly is desperate to keep Olivier Giroud quiet when the striker returns to Chelsea tomorrow night, while Graham Potter has heaped praise on the in-form AC Milan star.

The France international spent four years at Chelsea – scoring 39 goals in 119 matches for the Blues – before leaving to join AC Milan last year.

Giroud has enjoyed a bright start to the season, netting six goals in his last 10 appearances, and will be looking to remind Chelsea fans of his ability when AC Milan visit Stamford Bridge.

Koulibaly played against Giroud while he was still at Napoli last season and says he is a ‘dangerous striker’ who can score from anywhere.

‘He is a big player,’ Koulibaly said when asked about the threat of Giroud. ‘He showed it in Serie A last year, he scored a lot of goals. He did the same at Chelsea.

‘He is a dangerous striker, you always need to be aware of him because he can score from anywhere. It will be tough for the defenders tomorrow but we will be ready. It’s important that he doesn’t score and Chelsea win this game.’

New Chelsea boss Potter has also hailed Giroud, calling him a ‘quality’ and ‘fantastic’ player as he prepares for only his third game in charge of the Blues.

Chelsea drew 1-1 with Red Bull Salzburg in Potter’s first game as manager and beat Crystal Palace 2-1 in his first Premier League match in the dugout.

‘Giroud is someone Chelsea know very well,’ Potter said. ‘He is a fantastic player and plays the game in a really good way, using his quality and strengths.

‘He is a quality player for Milan. We have to be really good to get the result we want because they are a top team. It’s a massive challenge for us and an exciting challenge.’

AC Milan are currently fifth in Serie A – three points behind leaders Napoli – and top of Champions League Group E with four points from two games.