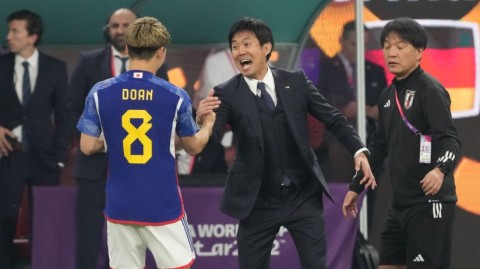 Japan boss Hajime Moriyasu hailed the greatest result in his team’s history after they pulled off a shock win over Germany in their World Cup opener.

Having trailed to a 33rd-minute penalty from Ilkay Gundogan, Japan fought back to triumph with strikes in the 75th and 83rd minutes from substitutes Ritsu Doan and Takuma Asano, both of whom play their club football in Germany.

Asked if he thought the latest upset in Qatar, a day on from Argentina’s 2-1 loss to Saudi Arabia, was the greatest result in Japanese history, Moriyasu said: ‘Yes, I believe it is a historic moment, a historic victory, to say the least.

‘If I’m thinking about the development of Japanese football, we’ve been building up. [But] It’s a big surprise.

‘We are reaching the global standard – and also we, of course, saw the Saudi Arabia surprise win. We are showing our capability from Asian football.

‘Maybe there was a possibility to concede more goals. However, the second half we caught them up, not just a simple counter-attack but waiting and then going for the opportune moments, our players demonstrated this.’

For Germany, this was another dismal start to a World Cup following their 1-0 defeat to Mexico in 2018.

That time they crashed out at the group stage and coach Hansi Flick, who had lost only once in 16 matches since taking charge in August 2021, admitted it was tough to take.

‘For us, not just players but the coaching staff, it’s a great disappointment of course,’ he said.

‘We were on the right path. I think in the first half we had 78 per cent possession and were ahead 1-0. Then I think we had good opportunities in the second half and unfortunately didn’t take advantage of them.

‘Japan were simply more efficient today. We made mistakes that we should never commit, especially in a World Cup.’