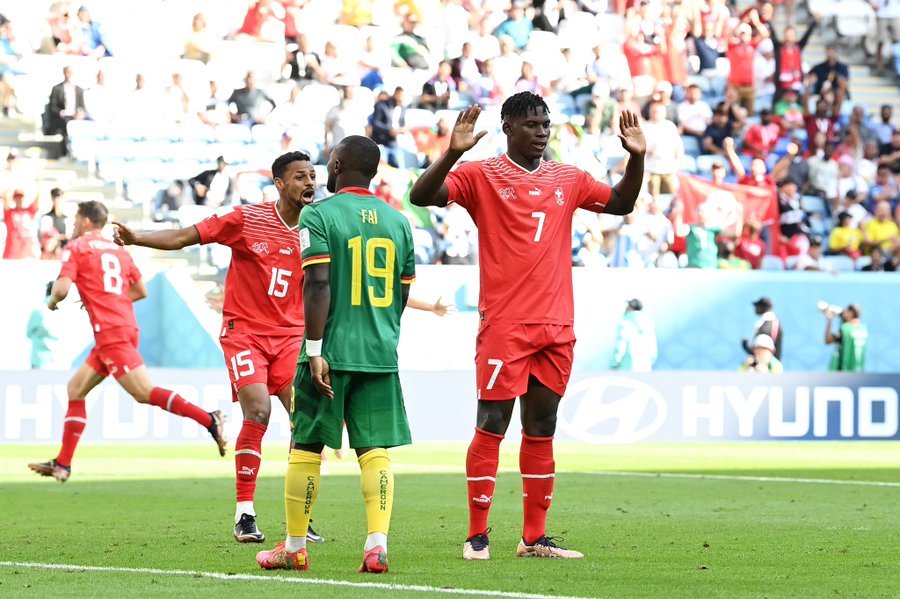 Breel Embolo scored the only goal of the game against the nation of his birth as Switzerland edged past Cameroon 1-0 in their World Cup 2022 Group G opener.

The Indomitable Lions failed to make a promising period of first-half dominance pay, and Embolo took advantage with a 49th-minute winner as Switzerland produced a more assured second-half display.

With Cameroon talisman Eric Maxim Choupo-Moting coming into the World Cup on the back of a prolific streak with Bayern Munich, it was no surprise to see the 33-year-old test Switzerland number one Yann Sommer in the 14th minute.

However, Choupo-Moting could not connect with the ball properly after skipping past Manuel Akanji – who got back well – as Sommer saved, having also kept out Bryan Mbeumo from a tight angle a few minutes beforehand.

With Switzerland unable to convert early possession dominance into clear-cut opportunities, Cameroon looked the more likely to break the deadlock during their forays forward.

The Rossocrociati’s main threat in the first half came from set-pieces, as Nico Elvedi and Akanji both sent headers wide from corners – the latter came in the first of two minutes of stoppage time, a notably short period compared to earlier World Cup games.

For all of Cameroon’s pressure in the first half, Switzerland had the ball in the net just three minutes after the restart, as Xherdan Shaqiri picked out an unmarked Embolo inside the penalty area, and the Monaco man powered home from a few yards out.

The Cameroon-born attacker kept his celebrations to a minimum – unlike the red contingent in the Al Janoub Stadium crowd – and Rigobert Song’s attackers looked far less lively than they did in the first half.

A carbon copy of Embolo’s opener was very nearly scored in the 66th minute, as Ruben Vargas was found in acres of space at the penalty spot by Silvan Widmer from the right-hand side, but Andre Onana got down low to make a smart stop from the attacker’s first-time effort.

Andre-Frank Zambo Anguissa poked the resulting corner behind to prevent Embolo scoring a tap-in at the back post, with Yakin’s side comfortably on top as the second half progressed.

Switzerland appealed for a penalty in the 84th minute when the ball struck both Vincent Aboubakar and Gael Ondoua on the arm as Cameroon failed to clear their lines, but the officials quickly waved away the protests.

Looking to put the game to bed for his side, captain Granit Xhaka let fly with a 25-yard strike in the 89th minute, which may have been heading into the bottom corner, but Onana got down well to save.

Six minutes were added on at the end of the second half, and the Rossocrociati should have made it 2-0 in the fifth through Haris Seferovic, but Jean-Charles Castelletto produced a stunning block to deny the substitute.

Defeat for Cameroon marked their eighth loss in a row at the World Cup finals, and one more would see them equal the longest-ever losing run at the tournament, with Mexico suffering nine defeats between 1930 and 1958.

Switzerland now sit at the top of Group G before Serbia tackle Brazil this evening, and they continue their campaign versus the Selecao on Monday following Cameroon’s clash with Serbia six hours beforehand.