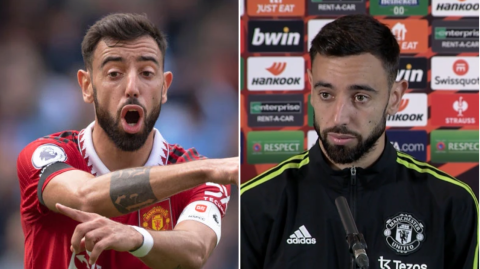 Bruno Fernandes says Manchester United must learn from their mistakes in Sunday’s derby defeat after berating his team-mates following the loss, while he rejected comparisons with table toppers Arsenal.

The Red Devils shipped four first-half goals against City, losing 6-3 at the Etihad – a scoreline that rather flattered the visitors – and it was claimed afterwards that both skipper-for-the-day Fernandes and Lisandro Martinez had ripped into the players over their performance.

Such was the fury in the dressing room, the shouts were reportedly heard in the corridor outside and Fernandes has not denied that he reminded his team-mates of some non-negotiables that they failed to apply in the heavy defeat.

Asked about the claims he had berated his team-mates and reminded them of certain ‘rules’ they had broken, Fernandes replied: ‘We had a meeting as the manager said, we went to see the tough things, to see the mistakes that we did.

‘After the game I said straight away I think we conceded three goals on the counter against a team that normally plays in possession.

‘We could have avoided that that but we didn’t and they scored the goals.

‘But as I said, we saw that, we knew what were the mistakes, and now more than see and understand what mistakes we did [the key now] is not to repeat it again and get back to the best results that we can and win games – which is what counts in football.

‘And even if we have done a bad game against City and we have scored six goals and it was 6-6 everybody would probably be happier, but obviously I think the main thing for us now is to get back on the winning track and carry on.’

With United having been outclassed to such an extent by City, Fernandes was asked where United’s level currently sits in relation to other teams in the league but refused to make any comparisons and feels the squad must focus on themselves and no-one else.

Asked how United currently compare to table toppers Arsenal, Fernandes responded: ‘We don’t have to focus on anyone else, we have to focus on ourselves. That has been the problem for the club in previous years that we want to compare ourselves with other teams, but we can’t do that.

‘You can’t change anything away from here. You can change what you do here, on the day-by-day, in the training sessions, in games, you can do different things for yourself, for your team, and that is what we have to think about – not about Arsenal, Liverpool or whoever.

‘We have to think about ourselves, doing the best we can, winning every game that we have in our hands and the future will say where we are in the table whether it’s first, second, third or even lower.’