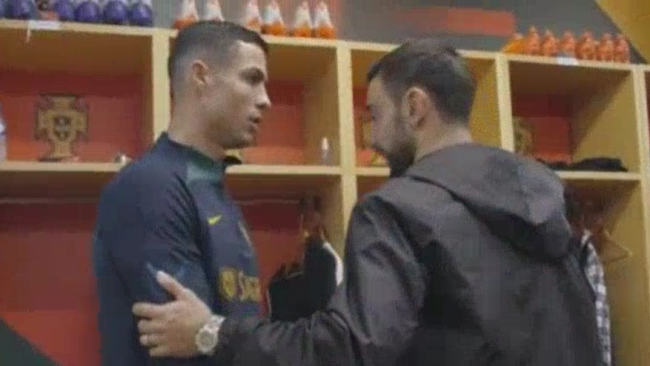 Ronaldo recently spoke to Piers Morgan Uncensored and hit out at United boss Erik ten Hag, former team-mates Wayne Rooney and Gary Neville as well as the Glazer family, who own the club.

Ronaldo also took aim at United’s young players, claiming that they do not care enough and do not listen to him.

The 37-year-old aimed a dig at Ralf Ragnick, has been fined £1m for the interview and an alleged awkward exchange with United and Portugal team-mate Fernandes went viral as the pair linked up on Monday for the World Cup.

Quizzed about that incident as well as Ronaldo’s remarks, Fernandes told Sky Sports: ‘I didn’t read the interview.

‘That is still clear. In his mind, the main thing is national team. We have to be focused on the World Cup.

🗣️ "I didn't read the interview so I'm ok with that"

Bruno Fernandes says he has 'no problem' with Cristiano Ronaldo and explains the apparent 'frosty' reception he gave his teammate earlier in the week. pic.twitter.com/0RuUNVJ304

‘Cristiano has done really well to play at five World Cups – this will be his fifth time. Everyone is ready for that and everyone wants the best for the team.’

Asked about the handshake, Fernandes added: ‘I was watching one of the channels that said it was cold and bad.

‘They went on a commercial break, the national team sent them footage with the sound, the sound revealed that he was joking with me.

‘If they explained what was really true in that video, people would know. Manchester United will be my focus after the World Cup.

‘I have no problem with anyone. I do my job. A manager once told me, the only thing you can control is yourself.’

United, meanwhile, have disputed Ronaldo’s version of events after the striker criticized the club over their handling of his summer absence.

Ronaldo, who was desperate to leave United in the summer, has now been linked with a move to German giants Bayern Munich in January while Ronaldo’s former club Sporting Lisbon are also still keen on signing him despite the interview.