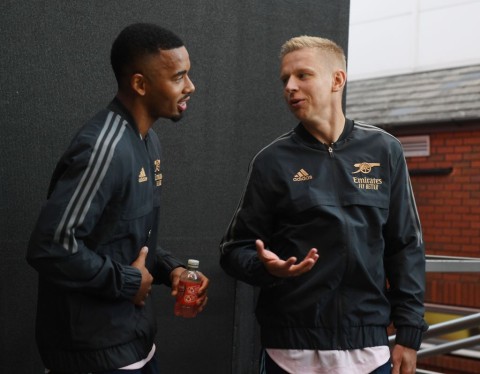 The Gunners signed Zinchenko and Jesus from Manchester City in the summer after they helped Pep Guardiola’s side win the title last season.

The duo developed a winning mentality during their time at Etihad Stadium, having both picked up four league titles with City.

Both players have enjoyed fast starts to their careers in north London, with Zinchenko impressing with his technical ability.

Gunners goalkeeper Ramsdale has highlighted the impact the former City players have made not only in matches, but also in training.

‘The only way I can describe it is a winning mentality. Just wanting to win every time and they’ve been doing it with us every day so it’s lifted the training.’

Ramsdale also praised fellow goalkeeper Matt Turner, who was brought in to be his No.2 in the summer.

“Especially in with the goalkeepers, we’ve got the lad Matt Turner from America, he’s like Tigger,’ Ramsdale added.

‘It’s like a classic American almost where you always want to do everything.

‘He wants to say yes to everything and it’s great because there’s days where you’re a bit tired and when you’ve got him who’s new to the club, it picks you up.’