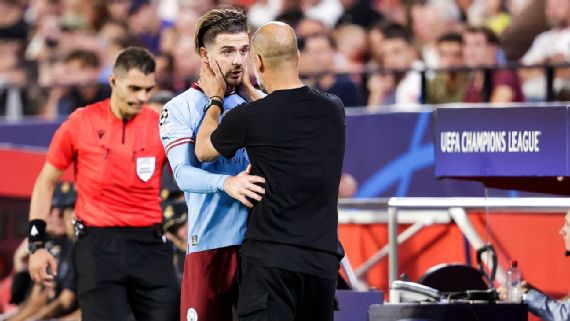 Pep Guardiola says he is “delighted” with Jack Grealish’s performances for Manchester City and has told the England midfielder to ignore the noise around his start to the season.

Grealish has been criticised for a perceived slow start to the new campaign and was substituted after 58 minutes of the Champions League tie with Borussia Dortmund on Wednesday with his team 1-0 down.

Guardiola’s side eventually battled back to win 2-1 but the City boss insists Grealish is doing more than enough and reminded the 27-year-old to shut out the critics.

“I don’t have any doubts about him, not at all,” Guardiola told a news conference on Friday.

“I know him and I’m more than happy and delighted with what he’s doing.

“I don’t know [if he listens to criticism]. I don’t talk about that, if they listen to all the comments or the radio.

“There are many things outside of football, hobbies and many, many things they can do, the cleaner and better. You can live without listening to anything.

“If you played well and the people say you didn’t play well it doesn’t matter. In three more days you have another challenge to be happy and do what you have to do. The rest is not important.”

City’s comeback against Dortmund was inspired, in part, by Grealish’s replacement, Phil Foden.

Both goals came in the final 10 minutes once Grealish had been substituted but Guardiola has defended his performance against the German side.

“In the final third he was the only one up front who made aggressive runs one against one but to make assists he didn’t have his mates in the box so we left him isolated,” added the City manager.

“When he goes against the full-back, only Erling [Haaland] was there. Gundo [Ilkay Gundogan] was not there, Kevin [De Bruyne] was not there and they should be there.

“In the first half, especially with the ball, we didn’t make any movements to help the players who had the ball and give him more possibilities to make it easier.”

Grealish is into his second season at the Etihad Stadium after his £100 million move from Aston Villa in 2021.

He registered three goals and three assists in his first year but amid questions about whether he contributes enough, Guardiola says he is not focused on the numbers.

“We didn’t sign [him] for the incredible goals or assists at Aston Villa,” said Guardiola.

“It was another reason and when he played he did it. He competes with top, top players as well and he knows it perfectly. But never complains about that. He’s such a nice guy and in the games when he didn’t play, he’s the first to help the team and in the training sessions he’s always there.

“All the time we ask them to be themselves, don’t think to be what the people expect you to be. Be yourself, as a person and especially as a football player, and this has to be your only concern.”