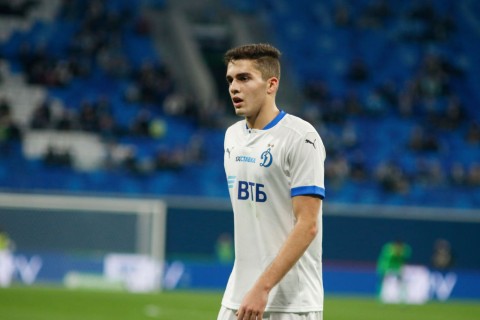 Dynamo Moscow midfielder Arsen Zakharyan insists he is still intent on joining Chelsea after his move fell through in the summer.

Zakharyan is regarded as one of the brightest prospects in world football and the 19-year-old was on the verge of being signed by Chelsea in August.

Chelsea were willing to pay his €15m (£12.6m) release clause, however, the deal collapsed due to FIFA and UEFA restrictions on signing Russian players.

Chelsea have retained their interest ahead of the January transfer window and Zakharyan is adamant that he still wants to make the move to Stamford Bridge.

‘My agents and my club have told me that a request has come from Chelsea. I have directly said my position is that I want to join Chelsea,’ Zakharyan told Russia’s Comment Show.

‘I know that there is a good competition in my position with Mount, Havertz, Gallagher, so I don’t mind going on loan to adapt to the European league.

‘I was stressed because I wanted this transfer.

Zakharyan also dismissed suggestions that he should switch nationality from Russian to Armenian in order to finalise his move to Chelsea.

‘I don’t want to change nationality to transfer to Chelsea, we have to find another way,’ the midfielder said.

‘I was proud to start for Russia and Karpin put his faith in me straight away by starting me against Croatia.’