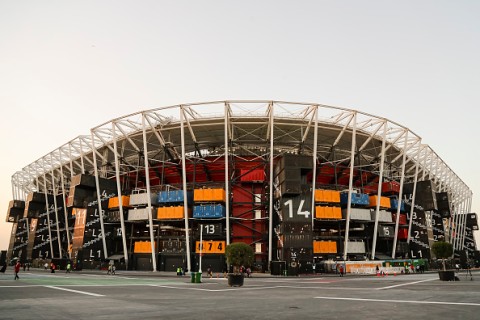 There’s plenty of weird goings-on at the World Cup 2022 in Qatar.

The very fact that it is taking place in winter instead of the traditional summertime is the main one.

The prohibition of alcohol in stadiums and the cabin-style mass accommodation are other examples from this unusual tournament.

But so to is Stadium 974, the World Cup venue that has sunned a traditional name – and is made out of shipping containers for good measure.

Here are the all-important answers to your burning questions.

Why is it called Stadium 974 and why is it made from shipping containers?

The stadium opened in November 2021 and is situated in Ras Abu Aboud, on the outskirts of the capital Doha.

The venue gets the name because it is made out of  974 recycled shipping containers, with that number selected as it is the international dialing code for Qatar.

The shipping containers pay homage to the area’s industrial history, with some of the storage units housing toilets and other facilities.

That is definitely a first for the World Cup, but its place in the history books do not end there – it also the first temporary stadium ever to be used at the tournament and it will be dismantled after the competition has ended.

The containers and seats will later be stripped out and provided as assistance to developing countries in the world.

The stadium will be dismantled after the World Cup

The 40,000 capacity stadium held its first fixture on the opening day of the 2021 FIFA Arab Cup, before going on to host a further five games in the tournament.

At the World Cup, the stadium will host six group stage matches including France vs Denmark, Brazil vs Switzerland and Poland vs Argentina.

It will also host the round of 16 tie between the winners of Group G and the runners-up of Group H.