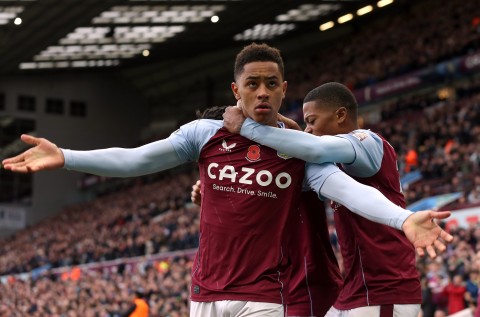 Unai Emery made a dream start to life back in the Premier League as Aston Villa emphatically ended Manchester United’s long unbeaten run at their favourite away ground.

While United had not lost at Villa Park since 1995 – a 23-match sequence – Emery had a good record against them as Arsenal boss.

And the man Villa chose to replace Steven Gerrard with the club hovering just above the relegation zone saw his new side race into a 2-0 lead inside 11 minutes through Leon Bailey and Lucas Digne.

United, captained by Cristiano Ronaldo with Bruno Fernandes and Harry Maguire out, pulled one back when Luke Shaw’s shot deflected into the net off Jacob Ramsey.

But Ronaldo was largely ineffective and United could have no complaints when Ramsey made it 3-1 early in the second half.

Villa fans had grown frustrated at a series of lacklustre performances before Gerrard was sacked so Emery has been warmly welcomed having been prised from Villarreal.

While the Spaniard gave the impression of kicking every ball on the touchline, his new side set a similar tempo on the pitch, racing into a seventh-minute lead when Ollie Watkins dragged Victor Lindelof out of position and Ramsey sent Bailey clear to thump a superb left-footed strike past David de Gea.

Four minutes later, Shaw was booked for a foul on Ramsey and Digne’s wonderful free-kick flew into the Holte End net.

Emiliano Buendia went close to curling a third and Matty Cash drove a shot over with United rattled.

But Emery’s former Arsenal goalkeeper Emiliano Martinez made good stops from teenager Alejandro Garnacho, on his first Premier League start, and a diving header from Ronaldo before United pulled a goal back.

Shaw’s drive struck Ramsey and left Martinez wrong-footed. Villa came out of the blocks quickly again after the break. Watkins drove down the left and cut the ball back for Ramsey to make amends for the own goal with a superb strike.

United rarely threatened a comeback after that although Ronaldo and home centre-half Tyrone Mings got a yellow card apiece after a VAR check to see if a flare-up merited greater sanction.

Having ended United’s nine-game unbeaten run in all competitions, Villa will head for Thursday’s Carabao Cup rematch at Old Trafford with renewed optimism.