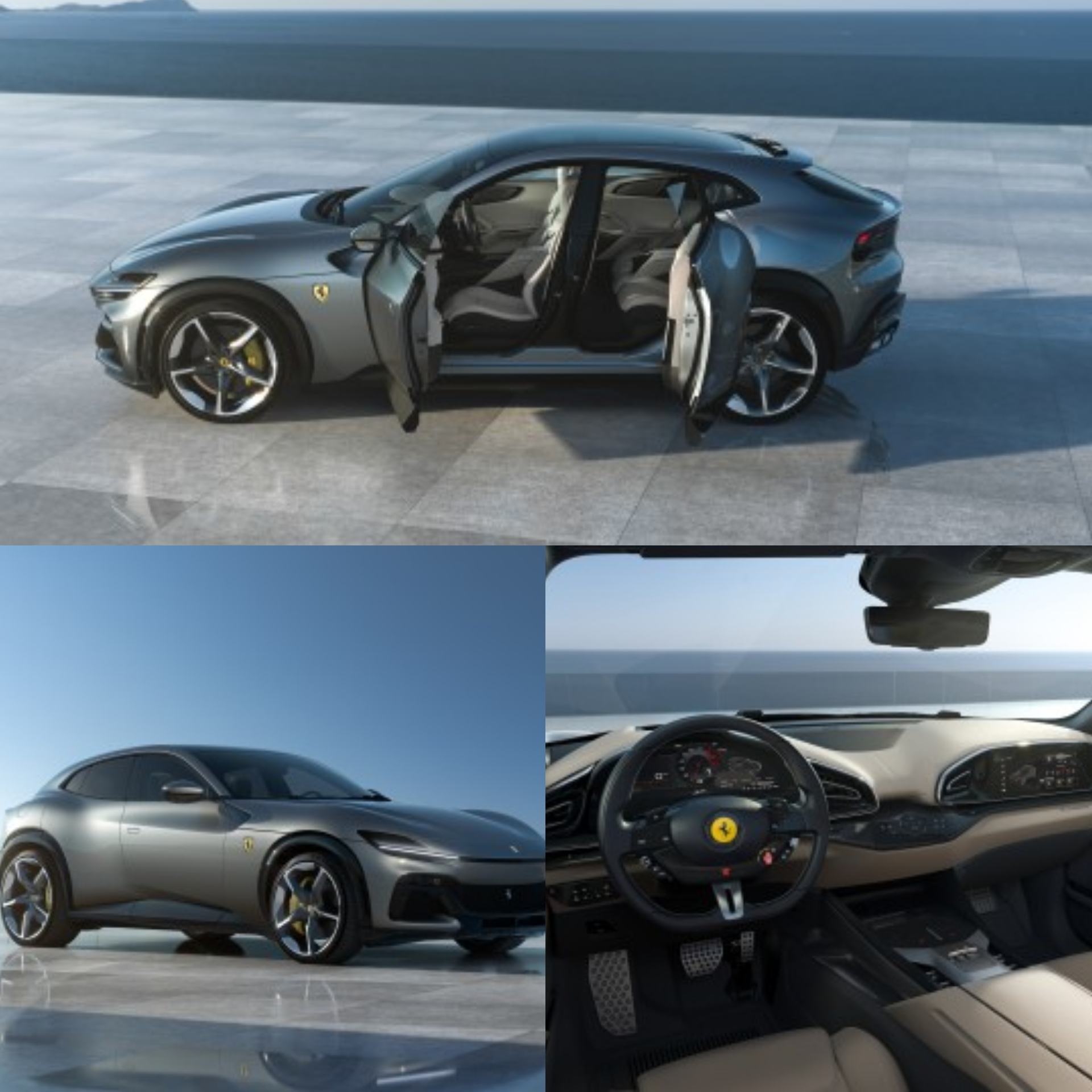 For these past 75 years, Ferraris have always had two doors – or no doors in the case of their Formula One machinery – and they’ve always sat extremely low to the ground. Not the Purosangue.

This is a Ferrari that can take four people off-road, a super-SUV with the emphasis on sports over utility. Yes, Ferrari has finally joined Bentley, Lamborghini, Rolls-Royce, Lotus, Porsche, Maserati and Aston Martin in building a high-sided performance car with an exotic badge.

At £390,000 it’s rather expensive, designed to keep the riff-raff away. There’s a lot of profit in that number. But the styling is less divisive and ostentatious than the competition.

With nods to the Roma’s nose, the F12’s aerobridge and the 296’s tail lights, it’s a sinuous, harmonious, graceful machine to behold. This is the most lissom-looking 4×4 by far. It’s the polar opposite to Lamborghini’s Urus.

The most surprising element of the design is the rear suicide doors. Hinged back-to-front, this is another first for Ferrari. And unlike other SUVs, the naturally aspirated 6.5 V12 engine is mid-front-mounted behind the axles with the gearbox to the rear, giving a weight distribution of 49:51 per cent. This, in addition to tarmac-sucking aerodynamic tricks, a new active suspension system and a carbon-fibre roof helps it handle like a true supercar.

It’s also the most powerful machine in this segment, delivering 715bhp to all four wheels. Zero to 62mph takes 3.3 seconds (0.1 seconds quicker than the car this replaces in the range, the shooting-brake-style GTC4Lusso, and exactly the same as Aston’s DBX 707 and the Urus Performante), and top speed is over 193mph, making it faster than the DBX 707, the previous record-holder for outright paciest SUV.

And the inside has a splash of classic Ferrari

Inside, it’s the most spacious Ferrari in history, and the most lavishly appointed. The driver’s cockpit is inspired by the SF90 Stradale’s and is mirrored on the wraparound passenger side, so they can keep an eye on your speed and cornering g-forces with their own screen. Children are going to love this.

The rear seats are independently adjustable and offer less room than a Range Rover or Bentley Bentayga but more than any Maranello-made 2+2.

Customers will probably have several Ferraris in the garage already and a Rolls-Royce Cullinen for family trips. But with the Purosangue they’ll have an all-in-one off-road supercar with space for four and their luggage. Should they wish, they could do laps of Laguna Seca and then drive to Aspen with their skis.

There’s a reason Ferrari is the last in the market to join this segment – it was waiting for the technology to be developed to create an SUV that looks and drives like a real Ferrari. It appears the company has succeeded. Ferrari has built a prancing horse for all seasons, with very little compromise. And it’s set to become the biggest-selling Ferrari ever.