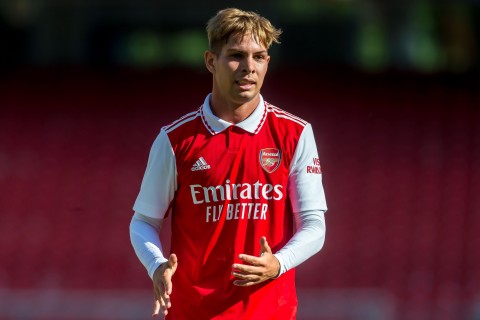 Mikel Arteta admits he’s ‘concerned’ by Emile Smith Rowe’s groin injury and has stressed that the midfielder remains an ‘important player’ for Arsenal.

The 22-year-old missed the majority of Arsenal’s pre-season campaign and an ongoing groin issue, which is related to his growth, has restricted him to making just four appearances as a substitute in the Premier League this term.

Smith Rowe has already been ruled out of Arsenal’s clash with Brentford on Sunday, while he will not join up with England’s Under-21s as he continues to recover.

‘I am concerned about the fact that we don’t have him available and when he’s been trying to train he’s not been feeling 100 per cent fit or pain-free,’ Arteta said.

‘This is the main concern and we have to find a solution to that. We’re trying to do that.

‘It’s very frustrating [that he can’t play for England Under-21s]. He’s a kid that loves playing football. It’s the biggest thing in his life. And when he’s not capable of doing that, especially after the run of games and performances that he had with us the year before, it’s just difficult.

‘But injuries are a part of football that you’re going to get at some stage of your career. It’s [about] how you face those difficult moments and how you make the next step. You have to go through that.

‘It is an ongoing issue that he’s had. He’s had some discomfort in the groin area and hasn’t had any continuity this season. It’s something we are trying to assess.

‘We’re trying to help him as much as possible in any way we can because we need him fit, we need him available and we need him performing at his best level because he’s such an important player for us.

‘Unfortunately for this period and periods last year we haven’t had him. But it’s pretty common at certain ages, especially when he’s gone from where they were to where they are straight away.

‘It’s our responsibility to manage that in the best possible way, to surround him with the right habits and the right people to support everything he needs to play consistently at this level, which is every day more and more demanding.’