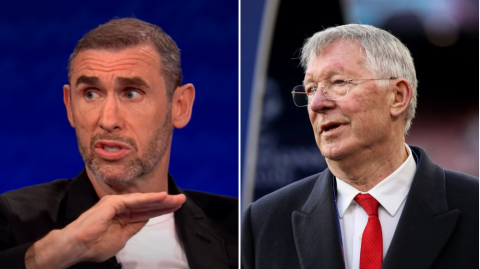 Ferguson’s side had a fierce rivalry with Arsene Wenger’s men at the turn of the century, with the two teams sharing the league title for seven years straight between 1997 and 2004.

Ferdinand told William Hill: ‘Something Alex Ferguson used to say about Arsenal during his team talks was, “Get in their faces. They don’t like it, they can’t deal with it. They’re babies.”

‘He told us: “Get right up against them and you’ll win this game. Rio, you’ll overrun them, you’ll overpower them”.’

But Arsenal legend Keown has criticised Ferguson for his comments about Arsenal and says he should have been focusing on his own team.

‘That’s poor, it’s poor,’ Keown told talkSPORT when asked about Ferguson’s comments. ‘Not a great topic was it.

‘I thought the great Alex Ferguson would’ve found a bit more to have gone at with the players to motivate them.

Keown added: ‘I’ve been in dressing rooms towards the end of my career where I went to work for a manager who would just ridicule the opposition manager.

‘I wasn’t learning anything from that. I was very motivated myself, but thinking back to Graham Taylor as a club manager [he] was very good, George Graham of course very good, an extreme I suppose [compared] to Arsene Wenger.

‘But I preferred a quiet approach, coming in at half time you play the game back in your mind’s eye, you work it through yourself and then you’re wanting to hear from the manager.

‘But when you come in and they’re continually talking, you can’t think straight. So I just needed a quiet moment, but then tell me what I need to know, and let’s go and do it and improve and win the game.’