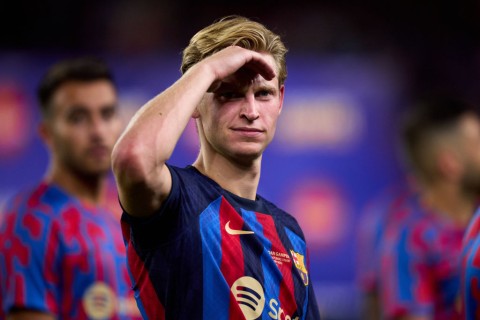 Frenkie de Jong has finally spoken out over his failed move to Manchester United this summer, strongly suggesting that a move to Old Trafford was at no time in his thinking.

United boss Erik ten Hag made the capture of his former protege his No 1 target this summer. Indeed, the Red Devils spent the best part of three months trying to first negotiate a fee with Barcelona, then convincing the player to move. Ultimately, that chase led to nothing but frustration; a fact exemplified by the fact United were able to tie up a deal for Casemiro in a matter of days.

The saga has since led United director of football John Murtough to come to a painful realisation over the De Jong chase. To that end, he knows lessons will need to be learned from future transfer pursuits.

Despite the difficulty in sealing the deal, Barcelona were always keen to sell. United struck a fee in the region of £63m, plus add-ons, that would have gone a long way to easing their financial burden.

But De Jong was adamant he did not want to move. And United surely must have known the writing was on the wall when a damning report listed 10 reasons why De Jong was opposed to the transfer.

Now De Jong has broken his silence on the move and admits things were not plain sailing. However, he also hints he was adamant that he did not want to leave, confirming assumptions that United wasted their time in chasing him.

“I always wanted to stay at Barcelona and this is why I always remained calm in the summer,” the 25-year-old explained, making it clear he was never too keen on joining United.

De Jong went on to admit that, although Barcelona were pushing for his sale, hevery much had a different opinion on his future.

“I can’t give too much details away. But look.. the club has it’s own idea’s and I have my own idea’s too. And sometimes this clashes with each other. But at the end of the day things went okay.”

De Jong has since gone on to start three LaLiga games for Barcelona, coming off the bench in the other three. He also has one Champions League start to his name.

Speaking ahead of the Netherlands’ Nations League clashes against Poland and Belgium, his national coach Louis van Gaal says he wishes De Jong was playing a little more frequently.

It’s the same for Memphis Depay, who also opted to stay at Barcelona and has also had a limited taste of action.

“It is true that many players called me in the transfer window,” he said. “But I always ended every conversation with: ‘This is my advice, but you make your own decision’.

“I am happy with the outcome. But I would be happier if Frenkie and Memphis would play more than they are now.”

Very few players turn down Manchester United when they come calling and De Jong – along with Erling Haaland – is one of the most high-profile examples.

In a sense, that’s an indictment of their 12-month malaise, which resulted in the sacking of Ole Gunnar Solskjaer. And with Ralf Rangnick failing to oversee an improvement, the club laboured home in sixth place.

That cost them the chance of playing Champions League football – and probably the signing of Frenkie De Jong too.

A player of his quality will feel they belong at playing at that level. Therefore, even with the attraction of hooking up again with Ten Hag, it was a chance he was very clear about overlooking.

Now, with the player making abundantly clear his wish to stay at Barcelona, the amount of time United wasted on the deal has now become clear.

Ultimately, it did not hinder their plans with Ten Hag still able to spend over £200m and strengthening his midfield options.

The man they did bring in, Casemiro, is so far yet to make his first start in the Premier League. And the Brazilian features in this list of 10 Premier League disappointments so far.

He has, though, come off the bench three times and also featured twice, including one start, in the Europa League.