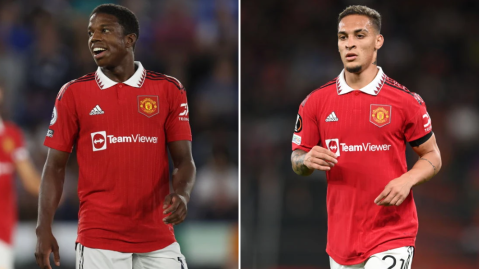 Tyrell Malacia has revealed Manchester United boss Erik ten Hag told him and new teammate Antony to ‘take it easy’ on each other after their previous battles in the Eredivisie.

Malacia joined United from Feyenoord early in the summer with ten Hag reunited with his former Ajax star during the final week of the transfer window.

The duo came up directly against each other last March with Ajax sealing a 3-2 win that helped steer them towards another Dutch title with Antony on the score sheet.

But Malacia’s tenacious performance kept the winger quiet for much of the contest with the two involved in a number of heavy challenges and flashpoints throughout the Klassieker.

The two collided again in injury time with Antony theatrically falling to the floor in front of the dugouts. After taking his time getting back to his feet, he was shown a second yellow card for time wasting, taking a swipe at Malacia as the full-back attempted to usher him off the pitch.

Now teammates in Manchester, Malacia and Antony are set to play key roles in ten Hag’s rebuild with the United boss warning the two to tone it down a touch on the training pitch.

Malacia told Sky Sports: ‘When he [Antony] arrived [at Manchester United] the first thing the coach said was ‘guys easy on each other’.

‘He’s [Antony] a good player and I love to play against him, and now I play with him which is fantastic.’

Luke Shaw was dropped from the United starting XI following opening defeats to Brighton and Brentford with Malacia making the left-back role his own since then, playing the full 90 minutes in each of his side’s games since then.

Antony, signed for a £86million fee, came straight into the team for the league clash against Arsenal at the start of September, opening the scoring on his full debut.

‘Every game is difficult [in the Premier League], every week is difficult – there are no easy games,’ Malacia told Sky Sports, speaking of United’s improvement.

‘[After the Brentford match] we spoke with each other a lot, as a team, we trained and the first thing we had to do was the basics – work hard.

‘That’s where it all started, you’ve seen it in the games. It wasn’t always good football but we worked hard and that’s why we kept winning games.