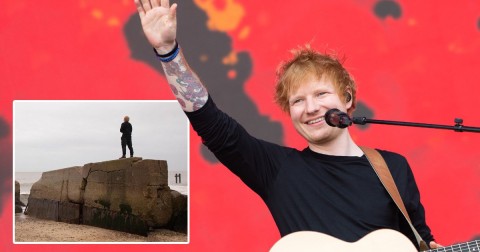 Ed Sheeran waved goodbye to Instagram in a dramatic end of year post, and reassured fans he would be back to serenade them again in the new year.

After wrapping up filming for a music video to go with his new album due out next year, the chart-topper declared he was done with 2022.

Taking to his social media account, Ed posted a behind-the-scenes snap from the beach set of the promo, where he can be seen with his back to the camera, standing on a giant rock looking out at sea.

The hitmaker signed off from set

Alongside the poetic picture, he alerted fans to his upcoming hiatus captioning the image with: ‘Signing off now until 2023.

Recently revealing plans to release a tell-all style documentary about his life and career, he also announced plans to extend his Mathematics Tour until 2026.

The singer-songwriter shared that he is struggling to get the balance right in deciding what to show and what to keep private in the ‘honest’ documentary.

The Perfect singer urged that he wasn’t willing to cause any unnecessary harm to his own life in order to make sure the film was transparent: ‘As it is honest… there is no point in putting something in if there is something detrimental to my life.

‘It is a very fine line, it is why I live in Suffolk and not in LA.

‘My life as a celebrity is turned on when I am in New York, but at home I am a friend, a dad, a husband, a son.