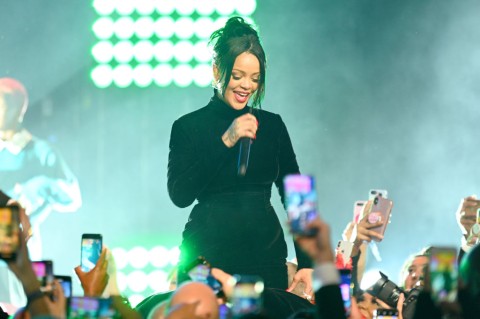 Rihanna is said to be in talks to take over the Pyramid Stage at Glastonbury festival next summer.

It is believed the 34-year-old singer is having discussions with festival organisers Emily Eavis and her dad Michael Eavis, about potentially headlining the programme.

The speculation comes after the star was confirmed to entertain crowds at the Super Bowl Halftime show on February 12 of next year.

Since the NFL announced the news of her performance at State Farm Stadium in Glendale, Arizona, rumour mills have been guessing at further appearances on world stages for the Lift Me Up singer.

Hinting Somerset could be the next stop, a source told The Sun: ‘Rihanna has been approached about Glastonbury and next year’s festival would be just the right timing for her.

‘She is a huge name for Worthy Farm and would be the perfect addition to the line-up.

‘Everything about Rihanna’s music comeback is being closely guarded but her team has been talking with the Eavis family.’

Also tipped to take the top spot, Arctic Monkeys have been linked to a headline slot for next year’s festivities, as has Eminem and Harry Styles.

Rihanna recently admitted she is anxious but ‘excited’ about putting on her Super Bowl Halftime Show.

Helping to produce the half-time spectacle via his own entertainment agency Roc Nation, Jay-Z endorsed the NFL’s decision and praised the artist for her rise to fame.

The rapper shared: ‘Rihanna is a generational talent, a woman of humble beginnings who has surpassed expectations at every turn.

‘A person born on the small island of Barbados who became one of the most prominent artists ever.

‘Self-made in business and entertainment.’

New mum Rihanna, who gave birth to her first child with A$AP Rocky in May, previously turned down the chance to perform at the Super Bowl in 2019.