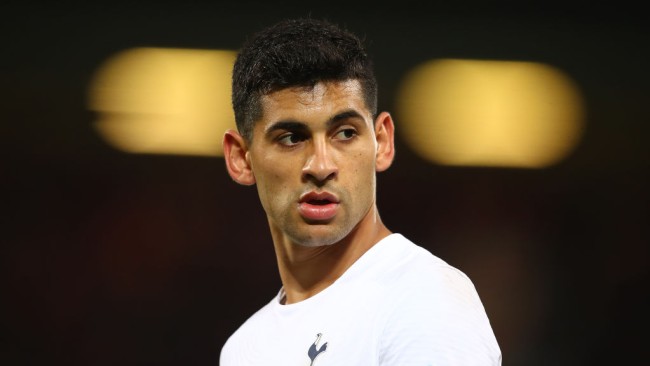 Antonio Conte has rubbished suggestions that Cristian Romero is more focused on playing for Argentina than Tottenham and says his desire to play may have hampered his recovery.

The centre-back missed last month’s defeat to Newcastle but returned a few days later to face Sporting – a match in which he appeared to pull up late on – and subsequently missed the come-from-behind wins over Bournemouth and Marseille.

Romero will also be unavailable for Sunday’s mammoth clash against Liverpool, with some fans questioning how committed he is to Tottenham.

The Argentinian FA requested that their players be allowed to skip the final Premier League matches before the World Cup – which was denied – though a number of their players are currently on the sidelines and unavailable for their clubs.

Conte, though, has firmly rejected the notion that Romero might be saving himself for Qatar in two weeks’ time and insists the 24-year-old wants to be out on the pitch even when not fully fit.

‘For this reason I tell the fans we have players really committed for the club and maybe Romero, he had an injury because he wanted to risk and we wanted to take risk.

‘Then he had this injury but for sure many teams are having big injuries and this is because we are playing every three days.

‘In every moment you show that the most important thing is the show must go on and then please I don’t want to hear in the future, to listen about people speaking about the welfare of the players because this is not true.’

Conte confirmed that Romero, Heung-min Son – who requires an operation – and Richarlison would miss the visit of Liverpool on Sunday, though Dejan Kulusevski could make the bench after missing the last 10 matches.

‘Lucas Moura is having some different phases for his pain in his tendon. Today he was really bad and he said to me he was really worried for this but I ask of him to try to be available because we need. Also Sonny you know is having now surgery.’