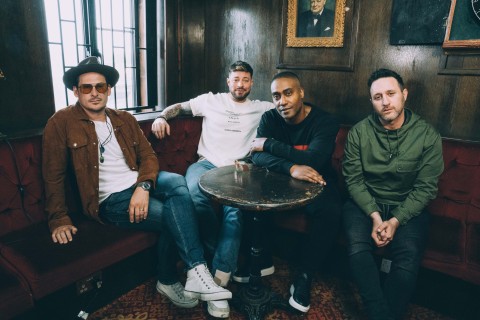 Blue may be poised for a big comeback… but they still rue the day they let their idea for a star-studded tour Fly By them.

In an exclusive chat with Guilty Pleasures, Lee Ryan, 39, Antony Costa, 41, Simon Webbe, 43, and Duncan James, 44, revealed they once made plans to hit the road with the famous faces the band had jumped into the studio with.

‘We actually had a (concept) for a tour that never came off,’ divulged Lee.

And Simon continued: ‘We’ve done a lot of duets with pop royalty over the years – Sir Elton John, Stevie Wonder, Lil Kim, Lionel Richie, the list goes on. It was our dream to get all the guys together and call it Royal Blue.’

It’s not all bad news though – as the boys hope to dust off a tune penned for them by Wonder, after they collaborated with the legend on a version of Signed, Sealed, Delivered in the early noughties.

‘That’s something we’d like to develop at a later date, further down the line,’ said Lee, who recently became a father for the fourth time. ‘It’s a half-written song, but it’s got Stevie riffing all over these chords and stuff. It’s quite special to hear.

‘That was written specifically for Blue, so we will address that.’

And the lads haven’t cut ties with collaborator Sir Elt. ‘We get Elton and David Furnish’s Christmas cards sent to our houses, which is nice,’ said Duncan.

The group have returned with album Heart & Soul, which is set to become their first UK top ten entry since 2004.

They’re also Bubblin’ with excitement to beat fans’ winter blues by kicking off their 20th anniversary tour next month. Tickets are available now, at officialblue.com.