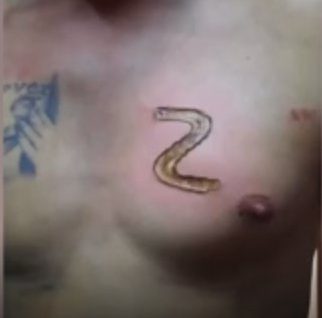 Disturbing footage shows a Russian man showing his support for Vladimir Putin’s invasion of Ukraine by mutilating himself.

Belarusian media outlet Nexta posted the clip where a shirtless man can be seen sitting cross-legged in what looks like a shed.

Another man heats up the ‘Z’ poker offscreen before he presses it against his friend’s chest.

The supporter then stands up and yells in Russian with his fist in the air.

The ‘Z’ symbol first made headlines after it was seen on several Russian tanks near the Ukrainian border.

A military source from the Ukrainian capital, Kyiv, told The Sun that the symbol was being used to distinguish their vehicles from their enemy’s.

It is still not known why Russia picked ‘Z’ as their symbol to mark their vehicles, but some have suggested that it might be linked to the Russian version of ‘for the victory’ (За победу) which is pronounced ‘za pobedu’.

The man had a friend heat up the ‘Z’ shaped hot poker and press it into his chest.