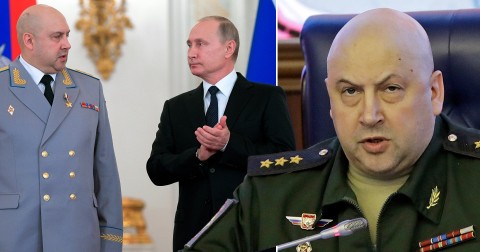 Vladimir Putin has appointed a notorious general who oversaw the murder of civilians in the 1990s as the overall commander of its armed forces in Ukraine.

General Sergei Surovikin is a veteran commander who lead the Russian campaign in Syria in 2017 where he was accused of indiscriminate bombing.

It comes on the same day as an explosion on the brindge linking Russia to Crimea, a major security lapse for the army and humiliation for the Kremlin.

Gen Surovkin’s promotion follows the reported sacking of the commanders of two of Russia’s five military regions after a series of dramatic defeats in the face of Ukraine’s counteroffensive.

Formerly the head of the Russian Aerospace Forces, Surovkin had been posted to the southeast for much of the war.

His appointment comes as the Kremlin desperately seeks a way to regain lost ground in its recently ‘annexed’ territories and will be seen as further evidence of panic in the Kremlin over the ailing invasion.

His controversial career has seen him serve two stints in jail and attract multiple allegations of corruption, arms dealing and brutality.

‘For over thirty years, Surovikin’s career has been dogged with allegations of corruption and brutality,’ Britain’s Defence Ministry said in June.

In 2020, Human Rights Watch named Surovikin as among military leaders who might bear ‘command responsibility for violations’ in Syria.

In 1991, Surovikin spent at least six months in prison after soldiers under his command killed three protesters in Moscow amid a failed August 1991 coup, but he was eventually released.

He also received a suspended sentence for illegal arms dealing in 1995, a conviction which was later overturned.

‘It is highly symbolic that Sergei Surovikin, the only officer who ordered to shoot on revolutionaries in August 1991 and actually killed three people, is now in charge of this last-ditch effort to restore the Soviet Union,’ tweeted Grigory Yudin, a Russian political scientist and sociologist.

‘These people knew what they were doing, and they know now.’

Among those who welcomed Surovkin’s appointment was Wagner Group founder Yevgeny Prigozhin, whose far-right mercenaries have been waging war in Ukraine on Putin’s behalf since the start of the conflict.

‘Surovikin is the most able commander in the Russian army,” Prigozhin said, according to a statement put out by Concord, a company he is associated with. He is a “legendary figure, he was born to serve his motherland faithfully.”

‘Having received an order [in 1991], Surovikin was that officer who without hesitation got in his tank and went forward to save his country.’