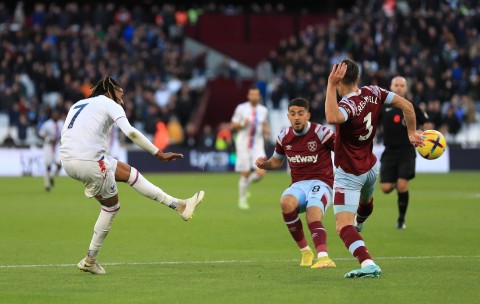 Frustrated David Moyes felt West Ham gifted Crystal Palace both their goals as they crashed to a dramatic 2-1 defeat at the London Stadium.

Said Benrahma fired the hosts ahead against the run of play with a 20-yard screamer but the Hammers defence undid all his good work five minutes before half-time, when Eberechi Eze robbed Thilo Kehrer and fed Zaha to drill Palace level.

Then, in the fifth minute of stoppage-time, Michail Antonio wasted a good opportunity with a weak cross straight at Palace keeper Vicente Guaita.

Just 17 seconds later Palace broke and Michael Olise’s strike deflected in off Aaron Creswell. ‘We didn’t deserve to win so there was always a chance we could lose it and that’s what happened,’ said West Ham boss Moyes.

Antonio had caused controversy when he won a penalty after a slight tug from Marc Guehi, only for referee Paul Tierney to reverse his decision after watching the replay.