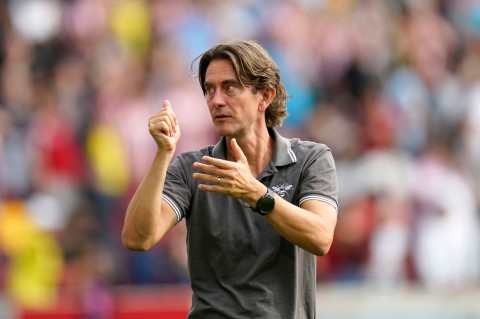 Leicester City will consider a move for Brentford manager Thomas Frank if Brendan Rodgers is sacked, according to reports.

The Foxes have made a woeful start to the new Premier League season, registering just one point from seven games so far.

Leicester’s miserable run continued on Saturday as they were beaten 6-2 by Tottenham, raising further question markers about Rodgers’ future at the club.

According to The Telegraph, Leicester are ‘admirers’ of Frank as a potentially replacement for Rodgers but are unsure whether the Brentford boss would be open to leaving the club.

Rodgers, who signed a new deal in 2019 which runs until 2025, would be entitled to a £10 million payoff if Leicester decide to sack him.

When asked about his position at Leicester after the loss to Spurs, Rodgers said: ‘I don’t know, to be honest. Whatever their decision is, I’ll always respect it.

‘There’s no doubt in the first seven games, we’ve had a tough start. Especially after the summer that we have had. Tottenham away, Arsenal away, Chelsea away and Manchester United at home.

‘It [the international break] has probably come at a good time to reset everything and break the cycle of the summer as well. And there’s lot of this game that was very good for us.

‘The owners will do what it is that they feel they need to do. I’m not daft, I know football. Losing the last six games doesn’t make great reading. I’ve every confidence that the team can push on and if they play like they did for large parts of this, we’ll climb higher in table’

When asked if he wanted to carry on at Leicester, Rodgers replied: ‘One hundred per cent.

‘You didn’t see a team playing with no conviction, no authority, no bravery. You’ve seen a team that is doing everything to get back in the game and leaving themselves a little bit open.

‘But I’ve every confidence and it’s a challenge I relish because I’ve never had this spell in my career before. It’s something I definitely do want to continue.’