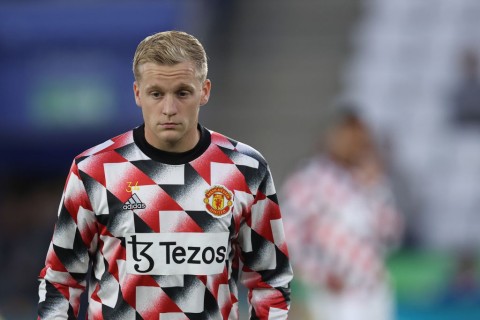 Leicester City are interested in signing Manchester United outcast Donny van de Beek as the Dutchman remains out of the starting XI despite Erik ten Hag taking over as manager.

The midfielder arrived at Old Trafford from Ajax in 2020 for a fee which could total £40m but has had an almost entirely forgettable time with the Red Devils since then.

The 25-year-old scored on his Premier League debut against Crystal Palace but has scored just one more Manchester United goal since then as he remained out of contention under Ole Gunnar Solskjaer and Ralf Rangnick.

With Ten Hag arriving things appeared to be looking up for Van de Beek as the new United boss had been the midfielder’s manager at Ajax to great success.

However, Van de Beek has been restricted to just three substitute appearances in the Premier League so far this campaign, not even being involved in Europa League contests.

Van de Beek’s lack of minutes at Old Trafford is going to keep him out of Netherlands’ World Cup squad this winter, but he will still likely be keen for a move in January if his first team chances have not improved.

ESPN report that Leicester are one team that would be interested in his signature, be it on loan or as a permanent signing, although United would want to recoup some of the money they spent on the failed signing if he were to leave for good.

Leicester are having a dreadful start to the season, sitting bottom of the Premier League table with just one win and four points from their first nine games.

While they have had little problem scoring goals, netting 15 in their nine matches, conceding 24 in the same span is proving far too costly for the Foxes.

Speaking on Van de Beek’s first team chances during pre-season, Ten Hag said: ‘Me as a manager and the coaching staff around him can do everything to set the right conditions so he can perform, but in the end, the player has to do it by himself.

‘It’s the same for every player, he has to do it by himself. They have to take responsibility for their performance. Donny has the capability. I have seen it, but he has to prove himself.’