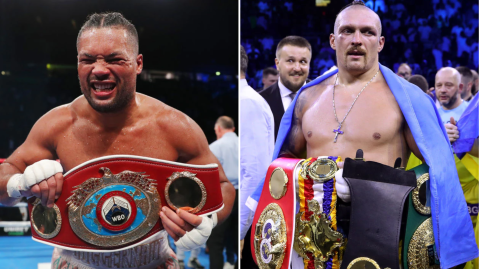 Joe Joyce believes Oleksandr Usyk will vacate his WBO heavyweight title if an undisputed fight against Tyson Fury does not materialize early next year.

Joyce, 37, secured the ‘interim’ WBO belt after his crushing knockout victory over Joseph Parker in Manchester in September, immediately calling out the undefeated Ukrainian in a post-fight interview.

The 35-year-old has also suggested however he could drop back down to the cruiserweight division where he previously ruled as undisputed king, admitting in a recent interview the physical demands of competing at a much bigger weight have taken their toll.

After Usyk’s gruelling 17-year career across the amateur and professional codes, Joyce believes the champion will seriously consider vacating his WBO title, a move that would see the Briton elevated to full champion.

‘Ideally, I would like to fight Usyk,’ Joyce told Metro ‘But it seems he is now looking elsewhere, considering moving back to cruiserweight or wanting to fight Fury but it doesn’t look like that is on the table at the moment. Usyk could vacate and then I would be elevated.

‘I think he’s probably going to vacate. He doesn’t want that smoke. He has also been at it a long time. Hundreds of amateur bouts over the years and he will have earned very decent money for his last two bouts [against Anthony Joshua].

‘I don’t know, does he really want to take on The Juggernaut? If the Fury fight doesn’t happen for him, I’m not sure he wants to stay here and take loads of licks and have a hard fight when he doesn’t have to.

‘But I don’t know what happens in boxing anymore. Fury changes his mind all the time, Usyk has a lot of options. But we will get there eventually. All I can do is keep calling people out and be patient.’

Joyce and Usyk previously crossed paths as amateurs in 2013, competing in the World Series of Boxing where the Briton fell to defeat on points. He believes it will be a very different story the second time around.

‘It wasn’t long after he won the Olympic gold medal in London. I was only four years into my career, still a bit of a novice and he was the Olympic champion. But it was a good fight and it would be good to do it again.’

Fresh from his career-best win over Parker in Manchester, Joyce plans to return to the ring in March – be it against Usyk or anyone else.

The former Olympian has been on track for a world title shot since his statement-making victory over Daniel Dubois in 2020, forcing his domestic rival to quit after relentlessly targeting his left eye with his expert jab.

Dubois, 25, has since rebuilt under the guidance of trainer Shane McGuigan, reeling off three victories since that career-first defeat and taking the WBA ‘regular’ title from Trevor Bryan with a fourth-round knockout win in May.

Dubois will hope to earn a shot at the ‘super’ WBA belt in 2023, another championship currently in Usyk’s possession.

And a rematch against the Londoner is firmly on Joyce’s radar with world title gold likely to be on the line when they meet again.

‘Of course the rematch is always going to be talked about,’ Joyce said. ‘Especially if he gets hold of one of the titles and sets up a unification fight, that would be very interesting.

‘He is young and he is only going to get better. He has recovered quite well picking up the WBA regular. If he gets the full title that will be an interesting fight.’